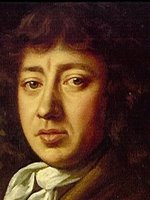 A recent article on the BBC's DNA website accuses me of heinous crime of "literature" and asks the pertinent question in the face of this twenty-first century technology: "Is Scaryduck the new Pepys?"

Granted, Samuel Pepys saw enough plague-driven mirth and firey woe to fill several volumes, but did he try to grow tomatoes out of his own poo? He did not. Nor was he ever caught short and forced to take a poo in a shed. However, after literally minutes of study, his diaries (which all feature a map of the London Underground inside the back cover - FACT!) reveal the following striking similarities between his work and mine:

March 27th 1664: "Another fulsome nyghte of frolics with Mrs Pepys was rudely interrupted by a hammering on the door to my rooms just as I reach'd ye vinegar strokes. It was a messenger, sent from his Lordship Carlisle with some haste and demanding an immediate reply. It read: 'Pepys, my man. Done a poo, yr goode friend & mentor, Carlisle.' Damn his eyes, and his britches too!".

March 29th 1664: "Up betimes and away to Tyburn to witnesse the hanging of the brutal murderess Mistresse Horton, a most wanton trolloppe and slattern who woulde suffocate her gentlemen for the contents of their purses. She was indeed, as many of the London journals point'd out, most wond'rously endowed, and I had the goode fortune to find my good self in the very front row at this sad spect'cle, thanks to my patronage of ye arts. The unfortunate Horton expir'd quickly, but I could see right up her skirt as she thrash'd about in her final dance with ye Reaper. Bonus."

April 7th 1664: "Up betimes and to my office, where I argued with Mr. Wellbeloved over whether it is considered correct to break wind in front of a lady. I countered that it is not only correct, but de rigeur in these modern times. Puritan that he is, I feare he would not dare let his britches squeak for fear of causing offence to ye fairer sex. The quarrel ended with my production of a noise that would bring down the very walls of Jericho, causing Wellbeloved to storm out in search of a minister to administer extreme unction. Alas, my victory was short-lived, for I had followed through."

April 9th 1664: "The most dreadful day, for I fear Mrs Pepys may find out about my liaison with Barking Mad Sharon who works at ye Pie Shoppe as their apprentice slattern. My undoing comes in the form of a note which arrived at our rooms whilst I was attending to some unfortunate business apropos the dreaded plague, stating the followinge: 'Mr Pepys, are you going to pisse your rich, yellow waters on my heaving breast this evening, or what? Your lustful paramour, Sharon from ye Pie Shoppe'. This canne only mean one thynge: woe."

Proof positive, then. Today, in which case, I'll be off to set fire to London, to see if anybody remembers me in 300 years. Anyone got a match?*