The true facts in the case of Mr Scarboro, Mr Martin and the mysterious disappearance of Arnold Fisher

The true facts in the case of Mr Scarboro, Mr Martin and the mysterious disappearance of Arnold Fisher

I am a witness in a dreadful car accident, and its awful, blood-curdling fallout. Hardly anybody was killed, but I've got this insurance form to fill in, and I am concerned that those otherwise pleasant people at Churchill may question my sanity. And they're the ones with the talking dog.

Here, then, in the name of truth, justice and the American way, is exactly what happened on that fateful evening. And may the deity of your choice have mercy on my soul.

Where were you at the time of the accident: Looking on, in abject horror, from my loft bedroom window, second floor of Scaryduck Towers, Weymouth.

Give a brief description of the accident: I was looking out of my bedroom window, which gives a panoramic view of the street below, and offers a pleasant vista over Portland Harbour. At no point, I may point out, was I using my binoculars to look into bedroom windows. However, my attention was drawn to the fact that my elderly neighbour, Mrs Warboys (name changed to protect the guilty), was standing completely naked in front of her bedroom window. I might not have noticed, but she had all the curtains open and the lights on. It was indeed a distraction, as they hang around her navel, and she appears to have a poodle nesting in her groin.

Also distracted, alas, was the driver of the white Renault van, who I now know to be Mr Scarboro, whose whole-hearted attention to the 90-degree bend outside my house was cruelly wrenched away by the totally unnecessary sight of a very naked Mrs Warboys yawning, stretching and scratching her nadger at exactly the wrong moment. With his window wound down and there being no other sound bar his van's engine, I clearly heard Mr Scarboro have cause to cry out the words "Christ on a Bike!" in surprise and alarm before failing to negotiate the bend and crash his van into Mrs Warboys' front garden.

Moments later, I saw the Ford Focus, driven by Mr Martin, drive along the same stretch of road, and similarly distracted by a naked octogenarian, collide with Mr Scarboro's van. Mr Martin did not shout out in surprise and alarm, as he was listening to The World Tonight on BBC Radio Four.

I would like to point out at this stage that while I called the Police to this incident, I am certainly not the person who quite unnecessarily called the Ambulance and Fire Brigade to the scene. We suspect this may have been the act of persons unknown after a now partially clothed and panicking Mrs Warboys ran out of the house screaming that one Arnold Fisher was trapped under the front wheels of Mr Scarboro's van.

It transpired only after a frantic search and the partial destruction of Mr Scarboro's van by the Fire Service that Mr Arnold Fisher was, in fact, a garden gnome, around which Mr Warboys' ashes had been spread some years previously. Luckily, the ambulance was still on hand at this time to sedate Mr Scarboro before there was any further unpleasantness.

Who, in your opinion, caused the accident?: Mrs Warboys' minge

In the space below, draw a diagram showing how the accident occurred: Bingo! 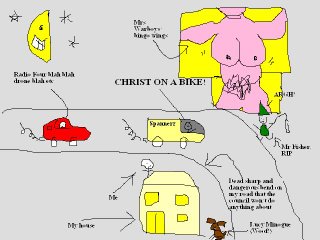