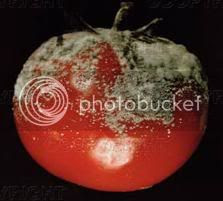 An email thudded onto my doormat this week. It was from B3ta ginger fuhrer Rob Manuel, looking for an update on Operation Manky Garden for the "What Happened Next" column in B3ta's weekly newsletter. So I'll tell you.

You may recall that operation Manky Garden was an attempt to replicate the phenomenon of the tomato plants which sprung up behind our house shortly after our local farmer sprayed his fields with raw sewage.

I set out on an all-tomato diet, and when the time was right, left a brown deposit in a hole in the ground somewhere in the South of England, watered well, and waited.

Loads and loads of weeds came up, but not a single tomato plant. In short: Bugger all.

And at this point I'd like to admit to a little …err… cheating. Alongside the brown trout, I also deposited an entire packet of tomato seeds, purchased from my local low quality garden centre ("Get yer flowers 'ere! Stick 'em in the ground, watch 'em grow!") into the fetid hole of woe, as a contingency plan.

Bugger my luck, they didn't grow either. I got more weeds, and I believe I am the only man ever to have actually cultivated Astroturf.

All this makes me an utter failure in the garden, even after cheating. I have to face the truth - I don't have green fingers. They're brown.

So, next year, if we're going to do this properly we'd might as well and get a professional or four in to help. The luscious, pouting Rachel de Thame, advising on which variety might produce the most pert, firm fruit. Or Charlie Dimmock, who could help with the water feature. Perhaps, even, a lightly-oiled Kate Humble if there are any small fluffy animals to be lovingly removed from the drop-zone. And then, towering over the three of them, like a colossus, the mighty, manly figure of Monty Don, shovel in hand, veins throbbing on his forehead as he squeezes out a tomato-laden brown trout to the thrashing delight of the ladies, mulching over and watering it in well, just like I didn't. Percy Thrower would be turning in his shallow grave under the Blue Peter Italian sunken garden.

Or, I could try something simple. Like peaches. God, I'd know if I'd eaten a peach stone. And I'd certainly know when it came out the other end. Just wait. Nothing can go wrong.

When I started this site, I didn't think my life contained enough woe to last more than a year to eighteen months. Some four and a half years later, I'm still at it, and this week will mark the 200th Official Scaryduck Tale of Mirth and Woe (Go on - buy the book. You know you want to). To this end, I have chosen three unpublished works as they all contain those ingredients that you, the discerning reader demands: poo and vomit, in large quantities.

* Swimming Gala - Somebody came to this site yesterday searching on "Ann Widdecombe massive tits" - was it you? Own up, pervert, we want to name names
* Venice - Or were you Mr (or Ms) 'I want to fuck Pauline Prescott'? Somebody here is a Big Hair fetishist, and it's certainly not me
* Still Ill - I will, however, draw the line at 'James Blunt topless photo'. Whoever you are: GET OUT

And now you're done here, how about taking a gander through Robber Rabbit's holiday photos?

* May contain traces of lie
Posted by Alistair Coleman at Thursday, August 24, 2006