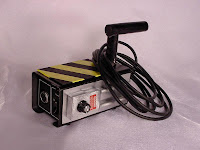 A couple of years ago, I went to town on these pages on the televisual car crash that is Living TV's Most Haunted. If you've seen it, you'll know what I mean. Television so bad, so contrived, so mind-bendingly dreadful, you can't stop watching it, wondering that there might be the slightest chance that the whole programme might actually be real.

Of course, it is the most awful fakery, and caught off guard, the programme's makers have more or less said as much. The final straw came in a bout of production team handbags, where resident parapsychologist (a job where you can make up any old crap for the interview for all it matters, I should imagine) Ciaran O'Keeffe fed so-called medium Derek Acorah with a load of made-up names of 'ghosts', only for him to become possessed by these fictional spirits on cue, on camera, in a vain attempt to talk dirty to Yvette Fielding. Derek left in a huff shortly after, and Most Haunted, once a guilty pleasure, hasn't been the same since.

Chronicling this little tiff forged a new interest in dodgy psychics, palm readers and spiritualists and set me off in search of how they actually work. I'm particularly interested in the antics of stage psychics, such as the dreaded Acorah, who still packs 'em in at theatres up and down the country, with a fan-base that won't hear a word said against him, or they'll club you with their handbags.

It is fascinating how these shows work, and you will be unsurprised to learn that psychic ability has very little to do with it. Once on stage, the only special talent required is the ability to read a person's character quickly and with reasonable ball-park accuracy, and to think on your feet. When the audience is very much on your side, this is far easier than you'd think.

The preparation for a 'psychic' stage show can start weeks or months before the big night. The name of the game is research, as once the word is out that Derek and Sam are visiting the Theatre Terrible in Deptford, he will be deluged with fan mail from little old ladies, hoping that he'll be in contact with "My Brian who went down in the Atlantic in 1942". Of course, Brian's spirit will oblige, and little old Elsie goes home with a warm feeling, completely forgetting she told the entire story to the man months beforehand.

Secondly, the production company will ask the box office for an audience list, as most theatres ask for names and addresses for promotional purposes. Pull out a few names from the ether, and Bob's your aunt's recently deceased lover the second he asks if there's someone with a certain surname in the house.

And then, of course, there's front of house gossip. There's nothing like sending a few flunkies out into the foyer before the show to earwig on conversations along the lines of "I hope he makes contact with Deirdre. I want to know where her jewellery went." Twenty minutes in, and Deirdre's there, and the ring's hidden in the loft. Bingo.

So: next time you feel the need to go to one of these shows, I urge you to use a bit of reverse psychology and to fuck with their heads. We've got Colin Fry coming to Weymouth in March, and at the risk of being chased out of the Pavilion Theatre by umbrella-wielding grannies, I propose the following:

* Send a bit of fake fan mail a few weeks before the event, telling him about your Brian's hideous spacehopper accident in 1973, which sent him to an early grave, along with the secret of the unique and rare Pink Oboe which has been in the family since great-great uncle Jasper took part in the Charge of the Light Brigade

And when the spotlight miraculously falls on your seat, pretend you are French and deny all knowledge.

There are only two barriers to my cunning plan. Firstly, and here's the nub - can anyone spare twenty quid for a ticket? And secondly - it's damn near sold out already, leading, obviously, to setback number three: I don't think I could possibly sit in a hall for three hours with the stench of granny wee.

It'll take weeks to get the smell out of my clothes; and, as bad experiences go, it'd be worse than a Daniel O'Donnell concert.


Post Script: This news story made me laugh far more than is actually healthy for a man of my age: York Psychic Museum closes 'due to unforeseen circumstances'
Posted by Alistair Coleman at Wednesday, February 14, 2007