On the Blue Goldfish

On the Blue Goldfish 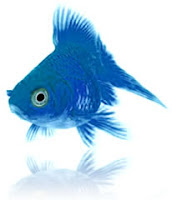 Hello! I am Scaryduck Junior and I am excellent.

You might not have heard that I started at a new school at the beginning of September. I am in Year 7 and I am now going to Secondary School and it is massive.

Luckily, my dad went to school once, and he told me about a few things I've got to look out for.

The number one thing is not to be a complete git in the first few weeks, as he says this will mark you out as a git for the rest of your school career. And he should know.

Second he told me to watch out for the Blue Goldfish, for this is a fate worse than death.

Some older boy will come up to you, he said, and ask if you've seen the Blue Goldfish. Then, said my dad, they'll flush your head down the toilet doing big LOLs as you nearly drown.

He told me not to worry, as by the time time I'm fifteen, I'll be asking new Year 7s about the Blue Goldfish myself.

So, when some Year 11 asked me if I wanted to see the Blue Goldfish, I ran away.

Later the same day, I saw the same Year 11 ask some Hufflepuff if he wanted to see the Blue Goldfish.

"Would you like to see the Blue Goldfish, Hufflepuff?" he asked.

"Yes. Yes I would, o Heir of Slytherin," he replied, or something.

Me and my friends Michael and Karem followed as he was led to the boys' toilets. There was a flush and a scream, and he came out soaking wet.

"LOLOLZERS! I said, again, "Just wait until I tell my dad."


On Any Other Business

Rikaitch wants the powers-that-be in television to throw all caution and public liability insurance to the wind and bring back the marvellous Takeshi's Castle.

Go on, sign his petition. You know you want to.

A swift Thursday vote-o, having finally got my act together and written some all-new mirth and woe for you. Choose, then, from the following four stories for tomorrow's story:

* Launcher: Not what you think

* The Nature Poo: Exactly what you think

* Strangers on a Train: Cannot say the same for this

Vote! Vote me up!
Posted by Alistair Coleman at Thursday, September 20, 2007

i got the blue goldfish at school