Overdrawn at the Royal Bank of Wank 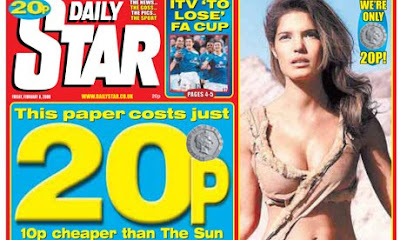 This one comes from the B3TA Question of the Week: Wank Bank stories. Trust me to break it.

When I was 15, I had an early-morning paper round. It took me from the posh end of the village (Telegraph, Daily Mail) to the rough end (Daily Star, Daily Mail) along the length of one road. I'd be up at ten past six, on my bike and home bay half past seven, giving me an hour on my homework before getting to school.

Of course, being up that early, you'd often catch glimpses of people shambling around their houses in various states of undress, some of whom were filed away for later, while others were sent straight to the mental dustbin. In the posh end of the village, there was the girl in the year above me at school who had teen comic Jackie delivered every Wednesday, and she'd wait on the other side of the front door in a short nighty, waiting for it to arrived. Memory duly filed for later use, even if she was the most terrible horsy type of the kind I despised.

Several doors down was the lady who took the Daily Express, who waited at the top of the stairs in an nighty shorter than Jackie Girl as I thrust my Red Hot News into her slot. Alas, the nobbly front door glass made her exhibitionism all for nought, her nadge looked like an aerial photograph of the Black Forest. Top marks for enthusiasm, nothing at all for presentation, but she gave me a fiver for my Christmas tip, so all was not lost.

And then, down the poor end of the village was Pete's Mum. Pete was - and let's not beat about the bush - the school git, who lived permanently under the wing of his over-protective mother, a twenty stone harridan who had no qualms about turning up on your front doorstep and punching you round the ear if you rose to young Pete's baiting. Which was often, because he was a git who lived for winding people up knowing that his old mum was his (enormous, sweary)shield. The sight of Pete's Mum stomping along London Road with Pete ten yards behind was something to behold, because you knew that some poor sap was in for a hammering.

Every morning for a year, I would turn up at their house at 6.45, rolled-up Daily Star held before me like some ineffectual sword, as Pete's mum got dressed in the living room window. The milkman would also be there, leaving his two pints of silver-top before fleeing back to his float to poke his eyes out with broken milk bottles. EVERY MORNING FOR A YEAR. That enormous bra. Those huge bingo wings. The back-tits.The knickers disappearing up the flabby arse-crack. Every detail filed, never deleted, still there three decades on. You can guess which of these memories stayed in my wank bank, corrupting it for ever.

No wonder I'm fucked up.
Posted by Alistair Coleman at Tuesday, January 01, 2013