On getting guilt-tripped into fostering a HOUND FROM HELL 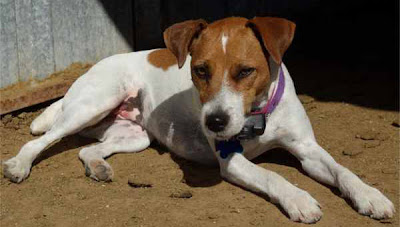 We fostered a dog.

We've found adopting older dogs very rewarding, first with poor, dead Snowy and now neither poor nor dead Charlie. So it made sense to help out a dog charity with their spare canines.

So: We got a heart-rending email from a dog charity, which said they had a spare 12-year-old small dog locally THAT WOULD OTHERWISE BE KEPT IN A CAGE, and asked us if we'd be prepared to take her on urgently until a permanent home could be found for her, preferably NOT IN A CAGE at the mercy of DEATH'S ICY GRIP..

One thing led to another, the nice dog went to another home, and we were offered a completely different, larger, younger dog some fifty miles away for a week's respite care from Doggy Prison.

I say "offered", but I really mean "guilt tripped", their exact spiel being "Foster this animal OR WE WILL KILL ANOTHER HOMELESS DOG probably WITH STICKS or OTHER DOGS"

Shamed, we fostered that animal.

He hit our home like a North Korean nuclear test, and held us hostage to his every whim like a spoiled Saudi prince.

Half Jack Russell, half Pointer, half mental.

He was everywhere, and sometimes it seemed several places at once. You couldn't move without him demolishing the furniture to follow you; and poor, sweet Charlie spent the week in hiding.

He was - very deep down - a lovely dog without a vicious bone in his body who would have suited an energetic family down to the ground. Alas, I like to take dogs for a walk that do not pull your arms out of their sockets; and not dogs that bark at you like a toddler in a tantrum every ten minutes because they're hungry or bored. Or hungry and bored and not giving you a minute's peace ever because you're on a downward spiral toward your third nervous breakdown aaaaaaargh get him away from me.

After his week's holiday with us, he went back to the kennels from whence he came, where we were met by a stocky woman wearing what appeared to be chain mail. She grunted at us, and gestured that we should leave the mad dog with one of her mail-clad assistants called Emma, before showing us a limp bundle of rags.

"Here's the dog we KILLED TO DEATH so you could bring him back, YOU SELFISH BASTARDS.

"We couldn't make up our minds, so we starved all the spare dogs for a bit, and put them in the ARENA OF BLOOD until a loser was chosen by the WILL OF THE LORD.

"We shall DINE WELL TONIGHT."

Offered a place at the table, we made our excuses and left.

Also, I hated that mad dog's little piggy eyes, and the way that whenever you looked at him, his bumhole was always staring back at you.

Reality: We quite liked him, but he was too much for two of us in a tiny flat with a nervous elderly dog. Pleased to say that a family were hoping to house him full time once they had dog-proofed their garden. Also the kennel people were nice, apart from the Comic Sans on the signs. We're not terrible, honest.
Posted by Alistair Coleman at Tuesday, March 19, 2013

We couldn't foster with our two, one old and one 7. At least you gave it a go. We hope a forever home is found soon.
Have a terrific Tuesday.
Best wishes Molly

We adopt ex-racer Greyhounds, have 3 at the minute. They're lovely dogs, quiet and bone-idle!

A chugger came calling over the weekend, trying to guilt-trip us into a charity subscription (not a hope).

For once, my elderly mutt bothered to wake up and wander to the front door, just in case there was a chance of a snack.

The conversation was brief....

"Hello, I'm calling on behalf of The Dogs Home, Battersea"

"No thanks, I already have one (*tickles dog*). Goodbye"

And for once, I was actually being truthful!

Fostering is fun. Yes, we've had our share of fur covered bladders, you learn to sniff before entering a room, especially at night time, and for some, you consider asking if the refuge would accept a teenager as a swap. But for every dog at my house, there's a place at the refuge for another whose time was running out.
It's my ABC of keeping the black dog out if the house: Act, Belong, Commit.
The refuge is doing me a favour.

Any dog that shows its bumhole so flagrantly is obviously lacking education.