Think Once. Think Twice. Think Don't Drive Your Motorbike On The Pavement 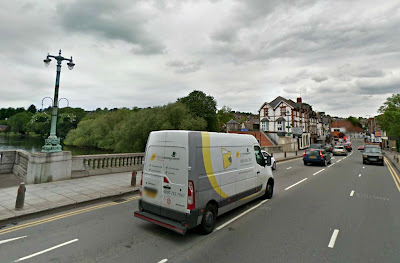 I have a theory about my drive to work, in that no matter how early I leave, traffic always conspires to make me arrive at exactly the same time. Luckily this time coincides with the canteen opening for the sale of crack cocaine.

However, this sad state of affairs means that I will sail into Reading at a speed slightly lower than that legally permitted, before spending half an hour trying to negotiated that final mile over the River Thames and up the big hill. It's frustrating, but nothing that mass murder or a nuclear winter couldn't solve.

One such crawl over Caversham Bridge was made completely EXCELLENT however, by one motorcyclist's attempts to jump the queue.

Finding both lanes of traffic at the usual standstill, he decided to resort to the one clear route to the other side of the river: Nipping in front of everybody else by driving on the pavement, like a LAWBREAKER.

While I don't believe in such things as Instant Karma, I – and others in cars and vans around me – watched with no little joy as he over-revved trying to mount the kerb and his bike slipped out from under his leather-clad lazy bottom. One thing led to another as he grappled with the throbbing monster escaping from between his legs, and he was hurled – bollock-first – onto a concrete bollard.

I dare say his helmet visor prevented his plums being bodily ejected through his mouth. Another victory for motorcycle safety equipment.

He was fine. Eventually.

Now if that had been Russia there would be several video versions of it, for the entertainment of all.

Yes, I suppose you were too busy "steering" or "listening to the wireless" to take a video.

When The Woman Formerly Known As Mrs Larrington was still a Penniless Student Oaf in Kassle, Germany, the river Fulda burst its banks and flodded the big roundabout at the bottom of the hill. Traffic chaos. Motorcyclist rants about how crap cars are and rides off into the water.

And then discovers the hards way where the steps down into the subway are.