On improving the rail network

So, I saw this on the Twitters the other day.

Inconvenience of my train not stopping at Stafford as planned & having to get off at Stoke instead slightly mitigated by seeing Nick Hancock
— Andrea Mann (@AndreaMann) March 29, 2014

@AndreaMann They should totally make celebrity greeters at railway stations a thing. Get off at Swindon, there's Billie Piper.
— Alistair Coleman (@scaryduck) March 29, 2014

Of course, there's swings and roundabouts. Sure, you could get Billie Piper at Swindon, but disembark at Rotherham, and you've got the Chuckle Brothers punching your ticket*.

And if I were to head down to the West Country to see my old dad, the thought of being met off the train by Cornwall's finest** comedian Jethro would be enough to get me on the first train home.

And I'd never go to London in case it's Danny Dyer.

Worst idea ever. Sorry I even brought it up.

The Other Two Out Of The Crucial Three

Last weekend I posted a stack of videos by Pete Wylie, who was once in a band called The Crucial Three with two others who rose to fame in their own right.


Now, it turns out there's a version of this song that I didn't know existed until last night. Looks like a different mix for TV and radio, which might explain why it was never a hit, because the album version (above) is far, far better.


Julian wrote many great songs, did sacks of drugs and became something of a historian. If you've got eight and a half minutes to spare, give the incredible Safesurfer a spin.
Posted by Alistair Coleman at Saturday, March 29, 2014 No comments:

On discovering you have over-priced your entire life by £1.99 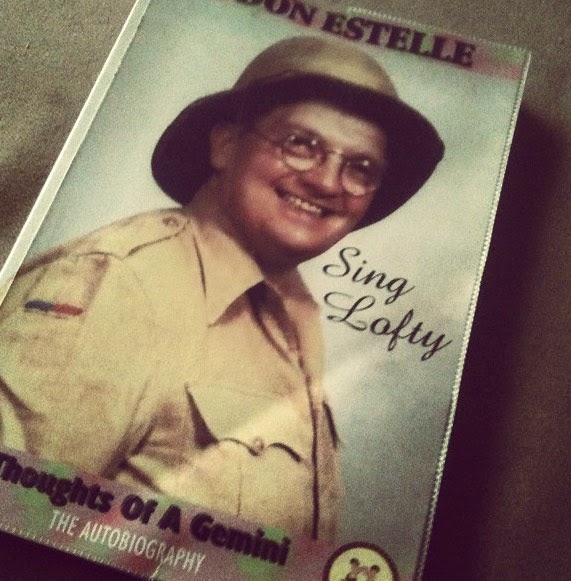 When the late comedian and singer Don Estelle found that the TV work had dried up, he took to the road busking in shopping centres, selling his CDs to passers-by.

When he self-published is auto-biography, widely regarded as one of the best-stroke-worst in the history of celebrity memoirs, he flogged them too outside local branches of Woolworths. Despite its reputation, SingLofty: Thoughts of a Gemini is now much sought after.

Without a publisher, PR company or distribution deal, it's down to many writers to flog their own wares however they can. Poor, dead Don apparently made a reasonable living busking in town centres in his pith helmet, making the most of what remained of his fame.

I, on the other hand write blog posts like this, trying to guilt trip people into clicking through to my Amazon store. I've also been known to carry a stock of books to flog when the moment arises, but I'm no longer that desperate.

This is essentially down to a single dispiriting conversation I had with a potential buyer that went exactly like this:

Ms Cheapskate: (Umms and Ahhs for a while) "I don't think it's worth that much."

Ms Cheapskate: "I'll give you a fiver."

The take-home message from this little exchange is this: Writers – two years of your life isn't worth that extra £1.99. Give it up.

Me.Books. HERE. They're really quite good and only two quid a throw. 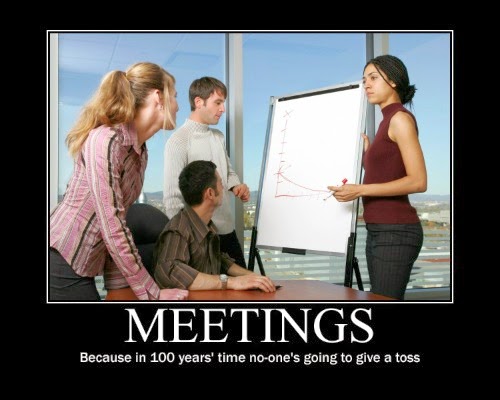 On a whim the other day, I found myself mucking out my locker at work.

Aside from the usual guff you find in these exercises, I unearthed:


I'd wax lyrical about that pay rise, but then I remembered what it was like at the time: A series of meetings that lasted for days at a time.

I REALLY hate meetings, and will do anything to avoid meetings if humanly possible, and it was these meetings that made me hate meetings. Meetings.

You see, we were – as many organisations are wont to do all the time – examining "new ways of working", mainly because the former new ways of working we had devised from a series of long Ways Of Working meetings weren't workingy enough, and somebody had been on a change management course.

I repeat: We had EXACTLY THE SAME MEETING ALL OVER AGAIN in the hope that we arrive at the same outcome.

Strangely, we never once arrived at a different outcome.

Years later, I cannot recall what new ways of working we decided on to replace the old ways of working. Needless to say, we are not working them any more.
Posted by Alistair Coleman at Monday, March 24, 2014 5 comments:

Email ThisBlogThis!Share to TwitterShare to FacebookShare to Pinterest
Labels: meetings, wasting your time

A Bit of Pete Wylie

Story of the Blues


This has nothing to do with the fact that Pete Wylie has now twice favourited my tweets on Twitter. I have been to many places and seen many things, but now my life is complete.
I've also found out that today is Pete's birthday. Happy birthday, Pete!
Posted by Alistair Coleman at Saturday, March 22, 2014 1 comment:

In Search of History's Greatest Monsters 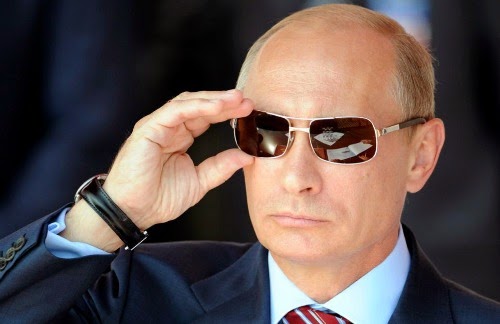 Vladimir Putin's been getting a lot of bad press recently, what with him being an enormous scumbag and walking into other people's countries without an invitation, sticking two fingers up at the world because he can turn or gas off and pull fifty billion quid out of our banks.

Anybody would think that he had some sort of plan.

Despite unfavourable comparisons with Adolf Hitler, Putin is hardly at the Fuhrer's level. Not yet anyway.

Neither is he a Stalin, a Genghis Khan, Idi Amin, Pol Pot or a General Pinochet.

So, I ask out loud, who exactly IS history's greatest monster?

I didn't have long to wait.

I found out on the way home last night, stuck behind a Toyota Prius at a mini-roundabout who passed up three clear chances to pull out, adding a good 20-30 seconds to my journey. At the next mini-roundabout they did exactly the same thing, causing no end of minor inconvenience.

Utter scum, I'm sure you will agree.

That's as nothing compared to the oxygen thief I encountered once I hit the open road. He was one of those hideous devils who drive at 20 mph below the speed limit, but immediately put their foot down once you hit a straight bit. As soon as the overtaking opportunity has passed, they immediately hit the brakes and keep a constant 38mph for the next five miles.

I know what you're thinking: Re-open the Nuremburg Trials. 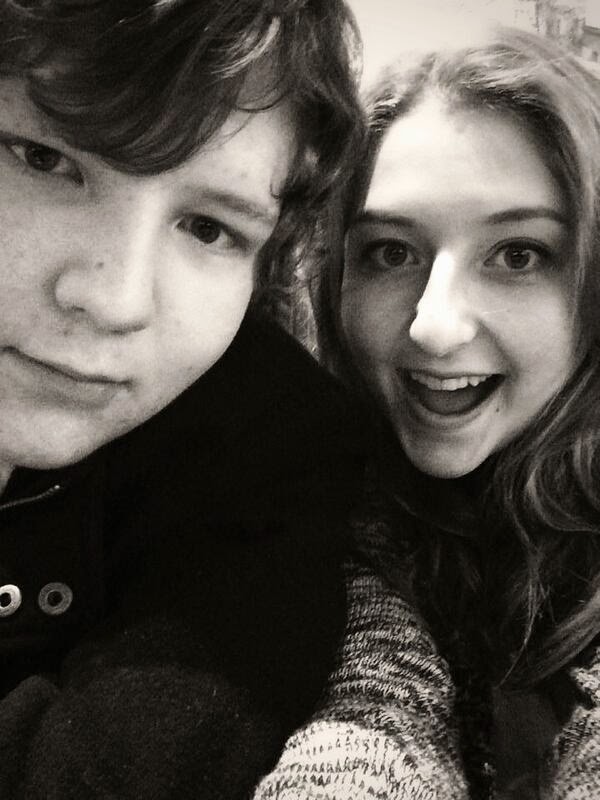 It's a special day today as my excellent son Adam turns 18 years old. With equally excellent daughter Hazel turning 20 this year, both of my younglings are now officially adults.

I would say "My work here is done", but a parent's work is never done, even if you've never been that brilliant at it in the first place.

Proud of the pair of them.
Posted by Alistair Coleman at Wednesday, March 19, 2014 2 comments: 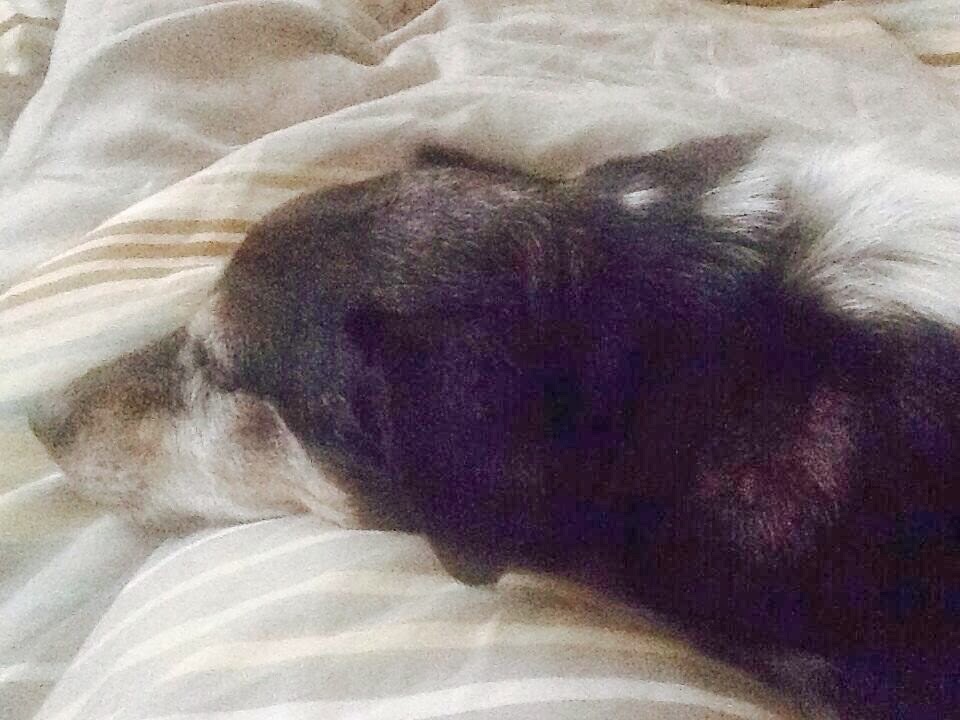 There are days when the depression, the panic attacks, the IBS and the whole damn world becomes far too much and it's all you can do to stay in bed, stuck under a dog. Last Wednesday* was such a day.

I am indebted, then, to Wilson Blue Rabbit for being that dog, and for not sticking his claws into sensitive parts while I was trying to sleep.

It's little victories that keep you afloat, such as creating a minor buzz about Moose Sex with a thing I wrote. Not from personal experience I might point out. Thank you AFP and China's Global Times for reading the thing what I wrote. And thank you Canada's CBC for reporting it the first place.

But I repeat: I NEVER TOUCHED A MOOSE.

Accidental poetry of the morning train 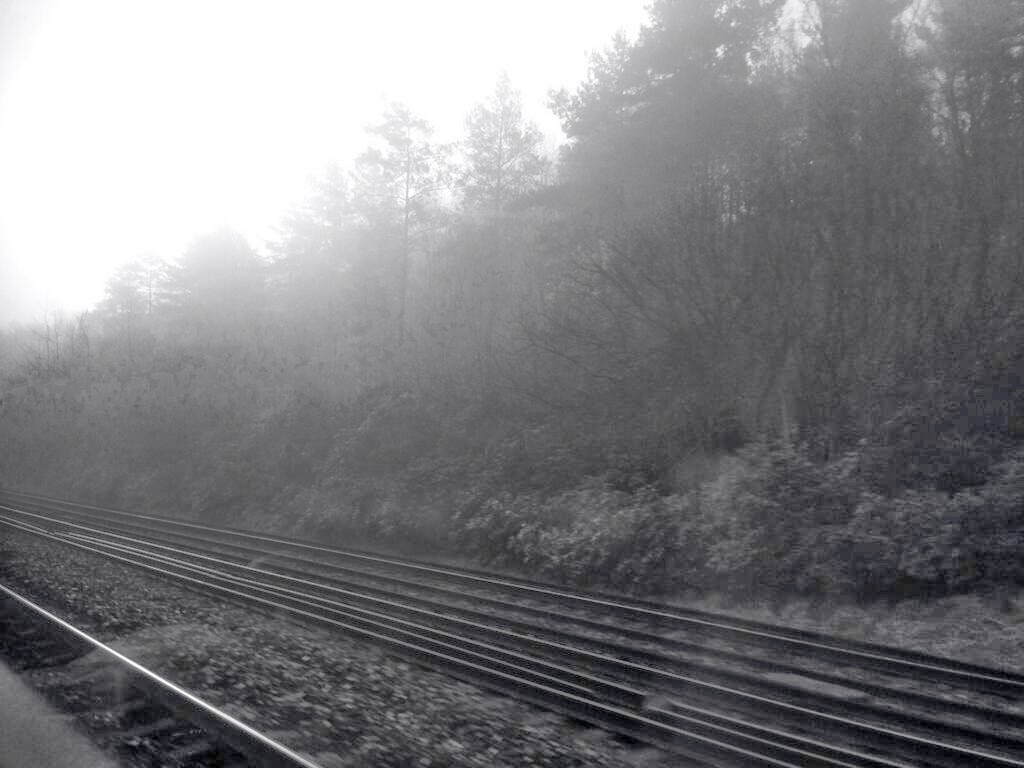 Sun through the fog 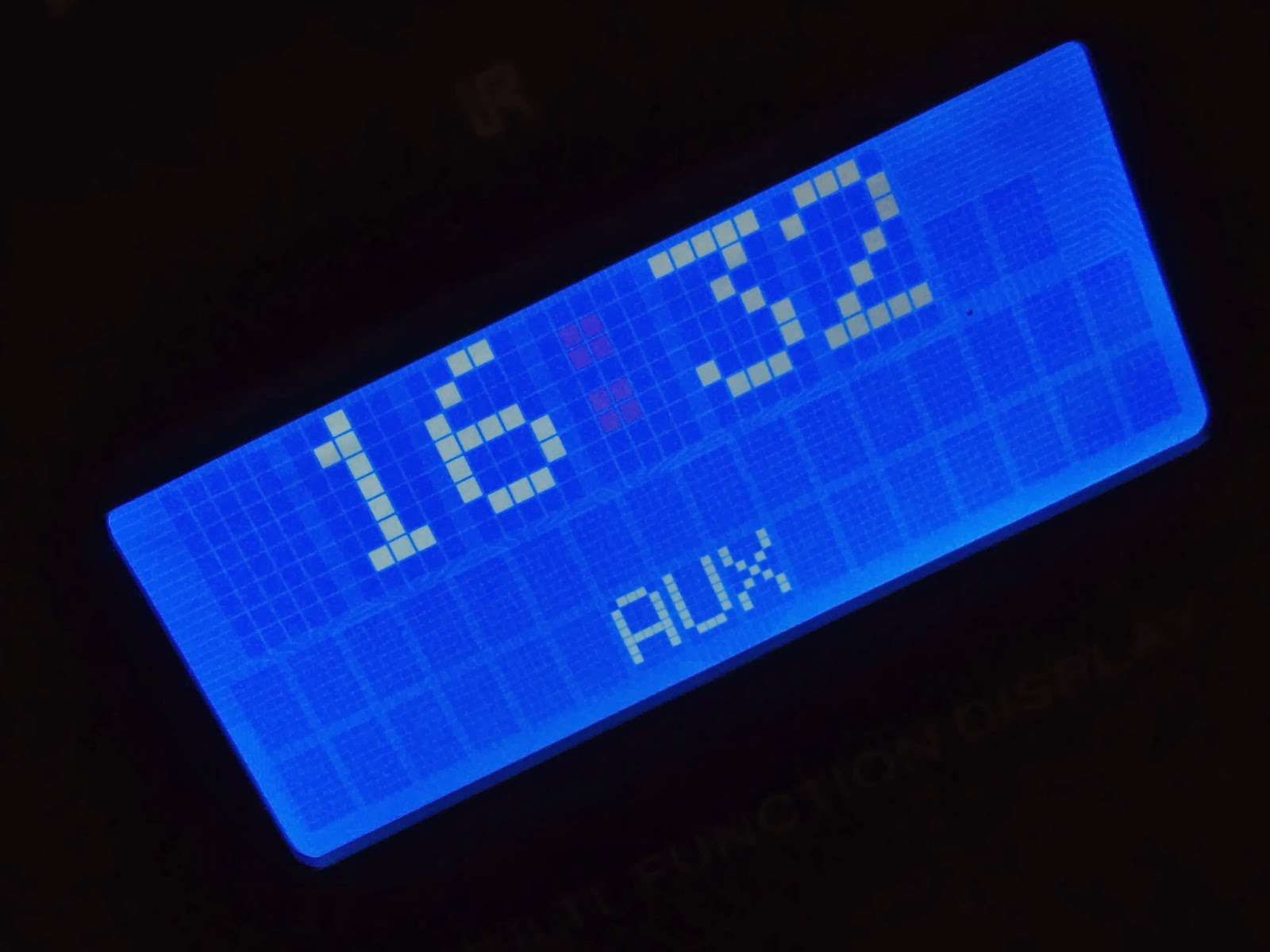 I am 48 years old, and I have only just realised that the AUX socket on a stereo system is not short for AUXOPHONE.

Degree of difficulty: I worked as a broadcast technician for over ten years. Virtually every piece of kit we had included an AUX socket.

This leaves me with one considerable problem: Where the hell do I plug my auxophone?

I've seen a few scams in my time, but I think this is absolutely 100 per cent legit, even though it took them the best part of three months to track me down and tell me I had won.

But Google, eh? What do they know about finding stuff?

Also, I am indebted to Barclays Bank for this timely email warning: 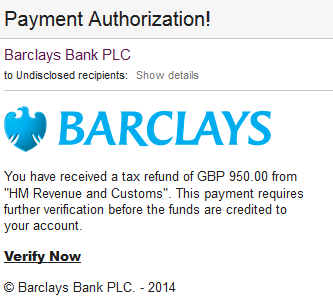 I shall open an account immediately, then send you my full details, PIN and mother's maiden name.

Thank you for writing, Barclays Bankers!* The exclamation mark shows that you are the real thing, because scammers don't use punctuation.

Email ThisBlogThis!Share to TwitterShare to FacebookShare to Pinterest
Labels: spam

Now that Vladimir Putin's decided not to have us all killed, it's pretty safe to play this.
Posted by Alistair Coleman at Saturday, March 08, 2014 4 comments: 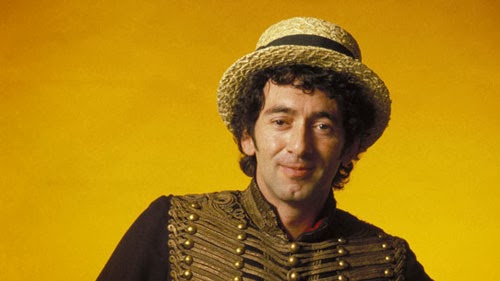 Eighties music is brilliant. But did you know...?

...As did OMD's follow-up to "Enola Gay", the equally apocalyptic "Trying to book hand luggage onto a Ryanair flight with no boarding pass"

Despite what Paul Young said, the "Wherever I lay my hat that's my home" stunt doesn't work for Windsor Castle

Level 42 only hit the big time after Levels 1 to Level 41 failed to find fame.

Midge Ure from Ultravox's full name is Midge You Are

The original version of Frankie Goes To Hollywood's "Relax" was about comfy chairs in IKEA, and was immediately banned by Radio Two

Tears For Fears' massive worldwide hit "Shout" was voted "Worst thing ever to happen in the world, ever" by the National Association of Librarians

Near Death Experience No.2 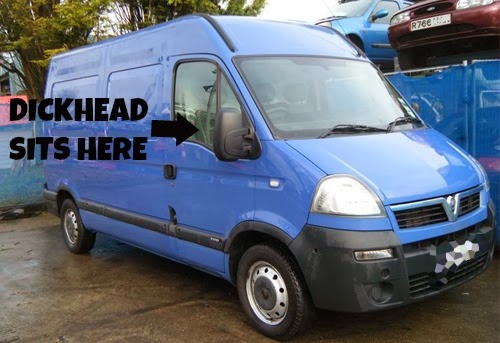 Contrary to popular rumour, your life does not flash before your eyes. All you get is the sheer naked terror of "Here it comes", and then the end. Or maybe I wasn't near enough to death to get the full 12-inch remix.

But that was close enough for one day.

Standard drive home from work, with the addition of a joker in a blue van weaving in and out of traffic across the motorway junction and down the A33 out of Reading.

Like any no-indicator traffic-weaver, he wasn't actually getting any further in front of anybody, just inconveniencing the maximum number of people who had to brake and take evasive action to cater for his shitty driving.

Then, as we threw his vehicle in front of me without so much as a by-your-leave, and as he did so, an unsecured scaffolding pole slipped off the roof and hurtled toward me.

Six feet of metal, arcing through the air in slow motion, directly toward my head as I wondered what the bloody hell I could do at 60mph on a dual carriageway.

It bounced once, and I threw two wheels onto the central reservation and waited for the worst.

It bounced back up at an angle, missed me by inches and ended up who-knows-where.

Blue van man had no idea what he had done, but it didn't stop me giving him a mouthful at the next roundabout.

Then I fled home, lucky to be alive.

All I had to show for it was a tiny, tiny chip on the passenger's side windscreen where the bouncing pole had thrown up a stone.

Oh, and a squeaky bum, but I have one of those anyway.

So, if you work in the construction trade somewhere in Berks/North Hampshire, and drive a blue Movano with last three on the index of GRU, this is my message to you:

"You're a disgrace, and you shouldn't be allowed out of doors without a grown-up."