He's the leader of the free world, keen golfer and host of popular TV show The Apprentice. But DID YOU KNOW...?

- Obama told Trump that bins night was Tuesday, when it's actually Thursday. Donald put the bins out two days early and was fined $100.

- Donald's favourite Indiana Jones film is Kingdom of the Crystal Skull. He also thought A Good Day To Die Hard was a "great movie, one of the best".

- Donald will sign an executive order this week to figure out, exactly, if wrestling is fixed.

- Donald thinks that you sue people for "liable".

- Donald's favourite piece of music is Wagner's "Ride of the Valkyries", which he calls the "Kill the Wabbit song".

- Donald has changed the nuclear launch codes to "password", because he knows nobody will think of that.

- Donald believes Louis Walsh when he tells one of his X Factor acts that they're better than The Beatles.

- Donald swears he didn't order those films from Virgin Media, it was his brother Ronald.

- Donald thinks the White House microwave is a television. He loves that programme about the bowl of nachos.

- Donald thinks it's "lack toast and tolerant". And "peddle stool".

- Donald has launched an urgent Congressional Enquiry into how Toadfish from Neighbours' wife could come back from the dead after all these years when we all saw her go over that cliff in the car.

Lines on my local council not emptying my green bin yesterday 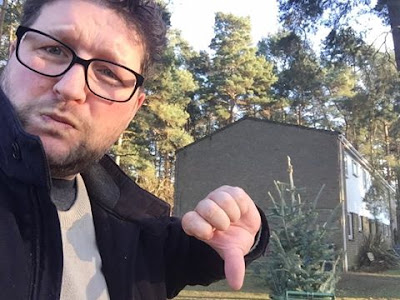 I return from blogging semi-retirement as my local newspaper has asked me to pen some lines on the occasion of Hart District Council neglecting to collect my Christmas tree from outside my home yesterday. As nothing else of importance has happened in the world recently, I was happy to oblige.

Dear the Fleet News and Mail,

As a local council tax payer who is also a paid-up member of the Hart Council green bin collection scheme, I was apoplectic with rage when they failed to collect my Christmas tree last week, despite promises to the contrary on council literature.

Rather than clog up your editorial pages with such important issues as municipal waste collection, I thought it would be more suitable to recount my tale of woe through the medium of verse.

After all, if it were good enough for the likes of Shakespeare, Keats and Tennyson to complain about their bins in this manner (Keats' "Lines on My Bin Going Unemptied For a Month" is a classic of the so-called Dustbin-Realist genre), then it's good enough for me.

Ode to Hart District Council and their shocking omission to collect our Christmas tree, even though we are fully paid-up members of their green collection scheme
By Alistair Coleman, Bard of Fleet, aged nearly 51

The local council bin men forgot my Christmas tree
Now it's sitting outside my house oh dearie dearie me
'What am I supposed to do now?' is something that I think
It could poke someone in the eye and blind a kiddiewink.

We even pay a council fee to have the extra bin
But what's the point, I wonder, if they ignore the tree within
I might just pull the blessed thing out and leave it on the grass
Or take it to the council office and shove it up their back stairs*.

January 20th 2017 will go down in infamy
Not because of Donald Trump, but because of my Christmas tree
All I can do is point and rage, it simply just won't do
And write these words in fury and send them in to you.

Now it's time to stand up and fight against this injustice
Who's with me to march and prove we really don't like this?
Gather your rakes and burning torches, I'll meet you all in town
I hope you've got legal knowledge because the cops will send us down.