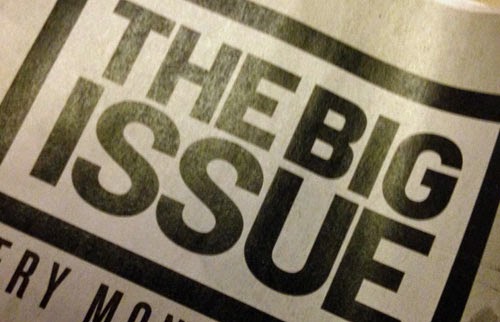 I expect you're wondering what happened after last week's difficulties with my local (un)friendly Big Issue seller.

If you're short on memory, or you're new to the story the tl;dr version is this:

Our local Big Issue salesman is getting rather pushy with the begging when he should be doing his job, for eg selling magazines. This came to a head last week, when he guilt-tripped me into buying him a sandwich, which he then refused.

As you'd expect, this confused me somewhat because I'm British and I don't take social awkwardness very well. This is mainly because everybody thinks a Big Issue sales person should be a happy, cheery soul, not some misery tapping you for money while you're trying to get from Starbucks to the British Heart charity shop. The lady in Caversham is lovely, and always has a kind word. Ours is not quite so cuddly.

So. I decided to reset our relationship completely, and stick to what I should have done before: Just buy a magazine from him, no more, no less. After all, that's his job - one that gives him the dignity of doing something for a living while getting a roof over his head, without having to resort to begging.

And Saturday lunchtime this happened as I strolled from Starbucks to the British Heart charity shop, belly full of skinny latte and buttered hot fruit toast:

"One Big Issue, my man," I didn't say, because that would have been dreadfully patronising.

I pushed a fiver into his hand, for two-pounds-fifty-worth of finest charity magazine.

And he stiffed me for my change. I was so British, I nearly said something.

Since I don't buy or read magazines anyway, buying Big Issue still seems like charity rather than paying someone for providing goods or services I need or want.

I don't mind giving to charity, but I prefer my charities to call a spade a spade.

Many years ago, on one snowy, dark, dismal just-before-Christmas evening, I'd be working late cleaning the lab for the long shutdown. The shops had closed up, the crowds dispersed, drunken revellers gone home under testicular removal threat if they turned up pissed on Christmas eve again. There were, to be brief, not many people around.

"Big Issue! Big Issue! Buy the big issue mate? It's my last copy..."
I was reaching for my change pocket in a fit of Xmas generosity.
"Once I've got rid of this 'un, I can go home."

A polite "Nah" and on I walked.

Of course I bought his paper off him. I'm not a monster.

Besides, he'd already heard me jingling the change.

My best ever Big Issue seller experience happened a few years ago walking through Covent Garden in London.

Seller called out to me "Big Issue mate".
I said no thanks to which he replied "ok how about a little issue" to which I laughed, he then said " now I've made you laugh how about you make me smile"' with patter like that how could I refuse.