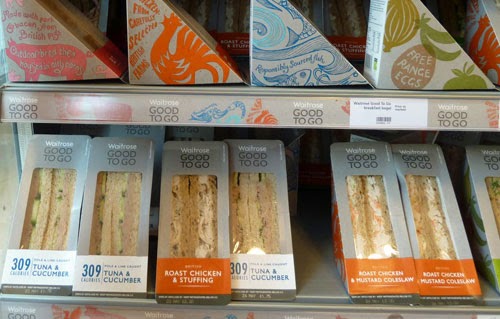 Help me with an ethical dilemma, people.

"Get me a sandwich, man," our Big Issue salesman asked and we bid him hello on Saturday afternoon.

And I bought him a sandwich - as usual - because I'm a nice ask-no-questions sort of guy, and it breaks my heart that even our town - officially the place with the best standard of living in the whole of the UK - still has a homeless problem.

But this week, the sandwich I bought wasn't a sandwich from Starbucks because we realised we're paying through the nose for a Starbucks sandwich that's no better than one from any of the local supermarkets.

So I bought him one from Waitrose. Not too shabby, I know.

"Take it back, I don't want that. Why didn't you get me a Starbucks sandwich?" he asks. Rather unreasonably, I thought.

I do my impression of a goldfish as he then demands that I go to Greggs to get him something else instead.

He got this: The square root of shit-all, and a determination never to show him any kindness ever again. Until next week, of course.

Part Two: The Dilemma of Charity

And here's where I am torn between kindness and bastardism.

It would be very easy to say "Beggars can't be choosers" and leave that to be the end of it. The would be exactly the kind of thing I would have read dozens of times over if this was a local newspaper story, and those were the comments left by people with names like 'Common Sence' and 'UKIPDAVE'.

But I'm neither Common Sence nor UKIPDAVE and I question my actions as much as I question Big Issue Man and his natural desire for a decent lunch.

Big Issue Man has a job and he makes money by selling magazines. But he's homeless, or in a hostel and needs as much help as possible. I promised him food, and threw a silent passive-aggressive hissy fit when he turned down my act of charity. I never stopped to ask what he actually wanted, and instead got him what I thought he DESERVED, even though he's entitled to preferences like every other human being on the planet.

It was a failed act of charity that was supposed to make me feel warm and fuzzy inside, but instead left me quietly seething. That's the selfish gene inside of us all.

By way of background, Big Issue Man has become increasingly cheeky in his demands, having tapped me for some money outside McDonalds so he could have a burger, and then not buying a burger. I was all 'never again' after that one as well, and it has come to the point that we sometimes take a detour to avoid him.

So, should I have got him a Starbucks sandwich, or something greasy from Greggs like he wanted? Or should I just say 'bugger it' and never speak to him again?

We have a Romanian woman with a pitch outside our local high street supermarket. I discovered the other day that she drives thirty miles to get to the pitch in her own car.

Now I'm all in favour of people trying to pick themselves up when they're down but she's not homeless, not local and can afford to run a car.

Something here isn't right and frankly she's spoiling it for other people who are genuinely in need.

Surely a Waitrose sandwich is good enough for anyone?

I drew the line last week at giving to a beggar in Reading who wouldn't stop yaking on his mobile phone whilst panhandling.

But when I got home I began to ponder on the philosophical conundrum: does one really exist without a mobile phone and a twitter account? Who was I to deny him his humanity? Should I in fact have topped up his Skype account?

A few years ago, my ex-wife was in tears on the phone to me. Her latest boyfriend, a musician who plays guitar down the acoustically brilliant underpass between the house and the town centre, had deigned to stay over for the third time the previous night, the first two times he had gallantly slept on the sofa. Apparently she had invited him to sleep in her bed, and he accepted, but when she undressed in front of him he declined the offer and left.
It probably wasn't the kind of comfort she was wanting when I answered in a surprised tone, "Oh! So beggars can be choosers! Who knew?"*

Scary, You should have told him you didn't love him enough to buy him a sarnie from StarF*cks.
But seriously, you were generous enough to provide him with food. YOU DIDN'T HAVE TO! I'd carry on seething and don't do it again!

One Christmas, we had loads of left over food from our work Christmas party. It was the last day in for us for two weeks, so we all took huge amounts of left-over food home with us. The local tramp who lived in the underpass at Archway held out his piss-stained hand to me on my way home.
"Spare us some change for a sarnie, mate?"
"I can do better than that!" I replied and presented him with a bag containing turkey legs, baguettes, fruit, cheese, pickle and much more, with a litre carton of fresh squeezed orange juice and some serviettes and plastic cups.
He took it eagerly, looked in the bag, then threw it all across the passageway shouting "What the f*** is this? Ain't you got no booze in there? What kind of a f***ing Christmas party was that, eh? F***in' liberty..."

Did you work out what the issue was with the sandwich, Scaryduck? I can picture someone eschewing a middle-class poncey Waitrose sandwich in favour of something with a bit more heft, but if the usual fare is a Starbucks equivalent then any ethical/class objection carries a lot less weight, somehow.

Was it maybe one/some of the ingredients which he doesn't like, and he worded his response badly?

Or maybe he was just being an arse, of course? He's only human after all, and is as entitled to act like an arse as the rest of us. In which case you're equally entitled to treat him like one.

(Would have probably improved the flavour, to be fair!)

Nothing like that has ever happened to me. . . .just saying.