"So, flowers in Volkswagen Beetles. What's that all about?" 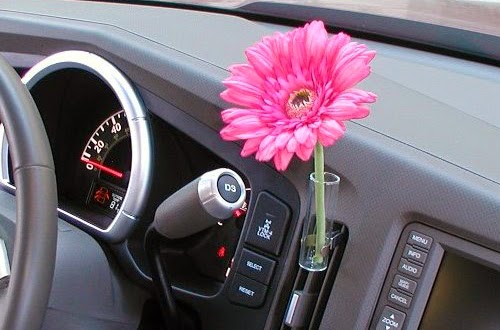 I've not got a great deal of love for the new Beetle. It's nothing like the old Nazi classic, built and sold by Nazis as a symbol of Nazism in an age of Nazi expansion. Nazis. The new version is a big, luxurious impersonation of the Nazi Beetle, and – to the horror of classic Nazi car lovers – they stuck the engine at the front instead of the back. It is, in fact, a VW Golf with a different-shaped body and a flower holder by the steering wheel.

What's that all about?

You'll probably see one today, unless you live in a country that has banned cars that are based on Nazi classics, and there's a 95% chance it will have a bloody great artificial flower jammed in the blumenvasen supplied for said purpose.

I've taken the opportunity to find out why the vase exists, and what motivates people to drive around like they're Morrissey on his way home from filling up at his local Tesco petrol station, and there seem to be many theories.

In fact, blumenvasen have been a thing almost as long as there have been cars. If there's one explanation that appeals to an ageing cynic such as myself, it's that they exist "to mask the smell of the chauffeur".

However, there is one which – to me –holds the most water. It's to annoy those of us who hate cute things like flowers in Volkswagen Beetles. Also, people who are always right all along. Damn you Volkswagen Beetle Flowers.
Posted by Alistair Coleman at Tuesday, April 21, 2015

During the sunflower season, I find the biggest one I can and put it in the Blumenvase. Real chick-magnet :-)

Have you seen the VW Beetle a Giant stepped on?
Otherwise known as the Audi TT ;)