Mirth and Woe: The Hot Bag

Mirth and Woe: The Hot Bag 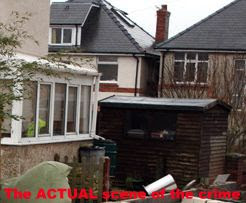 A shameless rewrite and repost of an old Tale of Mirth and Woe from 2004 which is proving rather popular in B3TA's Question of the Week. Completely rewritten, this new version contains exactly 127% more jokes than the old story.

In the words of Frank Zappa: "This is a true story. Only the facts have been changed."

I am currently in the process of moving house away from our luxurious but somewhat limited beachfront pile to a lovely place further inland that offers no less than four toilets. Count them: FOUR - a far cry from the mono-shittered place where I currently live.

To be perfectly frank, having four people in a house with only one toilet is always asking for trouble, especially in these enlightened days where crapping on passers-by from the tree in your front garden is somewhat frowned upon by the forces of law and order. And I should know, for I have experienced for myself the terrors of finding oneself without a pot to …well… shit in.

It all went wrong one Sunday morning whilst I sat in my pyjamas watching the repeat of the previous night's Match of the Day. As the hideous, gurning faces of the Chelsea First XI appeared on my 37-inch plasma monster, my body was gripped by a dreadful spasm of abdominal pain. It wasn't simply the case of a turtle's head – it was a whole bevy of turtles, all fighting to get out of my bottom at once. Big, sloppy, poo-smelling turtles.

Clutching my churning guts, I staggered up the stairs and headed for the toilet to do the necessary in order to relieve my agonies.

Not only was the bathroom occupied, but it was engaged for the foreseeable future by the charming, delicately flavoured Mrs Duck in the process of washing and conditioning her hair and in no position to allow intruders, no matter what the emergency.

With a supreme effort using techniques taught to me by monks in my days spent as a Ninja in the Far East, I relaxed sufficiently to quell my desire for explosive bowel movements and resumed my vigil in front of Match of the Day.

Then that jugged-ear Spurs bastard Gary Lineker turned up and we were back to writhing pain on the living room floor, with a small trickle attempting to escape.

It's at life-or-death moments that your Ninja training kicks in. As they say at Ninjitsu School: "Adopt, Adapt, Improve"

I staggered to my feat, grabbed a Tesco carrier bag from the kitchen, and headed to the only place I knew where I could find sufficient privacy to finish this most urgent of jobs.

I did a shit. In a Tesco carrier bag. In my shed.

Not just any old shit, either. It was what can only be described as a brown laser of foul semi-liquids containing, I am sad to say, Green Giant sweet corn.

Of course, there's a problem with supermarket carrier bags that you don't think about when you're busy adopting, adapting and improving: they make them with air holes to prevent stupid people from killing themselves TO DEATH by sticking a turd-filled bag over their heads. And I don't blame Tesco for this – the smell must be awful.

Alas, these air holes also allow semi-solid turds to escape as you dash up the garden, hoping to conceal your foul mess behind the water feature, showering your carpet slippers with turds.

It was only when I turned the hosepipe on the mess and screams emerged from the upstairs bathroom window that I realised that my charming lady wife was still in the shower.

I fled for the safety of Match of the Day, leaving the hot bag where it fell.

Then, the seagulls came. Loads and loads of seagulls.

Postscript: The charming Mrs Duck only found out about my morning of terror when this story first appeared in my excellent book. She wasn't pleased.

Postscript II: Don't forget to sponsor me in the Scaryduck Fun Run of Certain Doom
Posted by Alistair Coleman at Friday, April 04, 2008