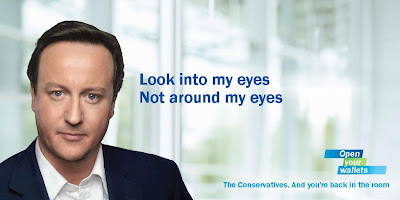 In fact, David Cameron is so awesome, he has kindly, in his serene awesomeness, allowed us to reveal some awesome David Cameron FACTS.

- The identity of David Cameron's mother has never been revealed, for fear of acolytes worshipping her over and above His Holy Awesome Daveness. However, he has hinted that she "is not for turning", suggesting that he has never done her up the wrong'un

- Some say David Cameron is The Stig. In fact, it's the other way around

- David Cameron says his favourite band is The Killers. The Vegas-based band wrote the song Human about the awesome Tory party leader, with the refrain "Are we human, or are we Awesome Dave Cameron?" repeated throughout

- David Cameron only has one album on his iPod: The complete unabridged audiobook of "Why I'm Awesome" by David Cameron, read by the author

- A keen bike rider, David Cameron won back-to-back Tours de France between 1999-2005. However, he has never been able to shake off allegations of drug misuse, stating that there is no reliable urine test for awesomeness

- Having secured the backing of Rupert Murdoch's Sun newspaper before the forthcoming election campaign, it has been revealed that there is no truth at all in stories that David Cameron might have used the political manoeuvre known as the "reach-around" to gain the Aussie-born media mogul's full attention

- Neither is there any truth at all in stories that David Cameron's favourite musical instrument is his prized pink oboe, which he learned to play during his years at Eton

More David Cameron facts HERE. Nothing to do with me, squire.

* Value of AWESOME may go down as well as up. But mostly down. May the deity of your choice save us all
Posted by Alistair Coleman at Monday, January 25, 2010