A sorry tale of addiction, clogged arteries and certain doom 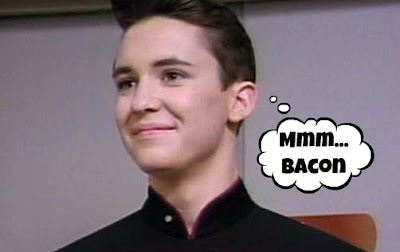 There's an episode of Star Trek: The Next Generation called The Game where the entire crew of the Enterprise are rendered insensible by an addictive computer game designed by a bunch of alien nasties to take over the ship and - ultimately - the Federation. However, thanks to the efforts of Commander Data and Evil Wil Wheaton's not-evil twin Wesley Crusher - the only shipmates not reduced to the level of drooling incompetents - both the ship and Life As We Know It are saved.

A similar thing is happening in our office, except through the medium of bacon-and-egg muffins. Every morning, the building wafts with the smell of freshly-cooked bacon, and desks are littered with muffin crumbs, blobs of egg yolk and canteen detritus as workers get their fix of pork product.

The implication of this strange and sudden mass addiction is clear: If everybody in our establishment ends up weighing twenty stone and is unable to do anything without keeling over clutching their chest, it is entirely down to the introduction of bacon-flavoured crack cocaine in our canteen. In fact, it's worse than crack cocaine, because it's so bloody cheap, extraordinarily delicious and isn't named after part of your arse.

Of course, I put this sad state of affairs down to a rival organisation, literally fattening us up before they strike, ending Life As We Know It through a sneaky and effective infiltration of our breakfast bar. What their motives might be is unclear, but my chief suspicion is that they are going to challenge us to a six-a-side football tournament and look surprised when they "forget" to organise the St John's Ambulance like they promised, and swap our half-time oranges for a metric shed-load of bacon and egg muffins, knowing we are helpless to resist.

Save yourselves, people. I'm done for.
Posted by Alistair Coleman at Thursday, July 26, 2012