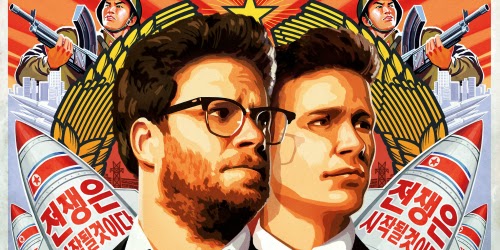 So. I watched The Interview.

Of the many bad comedy films I have seen, it is certainly one of them. I'm not saying that because I'm a Korea-watcher and they were bound to get details wrong, but because it's a really, really bad comedy.


The good news is that despite all the threats, despite hackers taking turns in stealing data from Sony and hammering North Korea with DDOS attacks while sitting back and necking popcorn, despite Pyongyang resorting to actual racism (KCNA refers to Barack Obama as the culprit behind The Interview, "a monkey in a tropical forest"), the film finally got released and is a beacon of freedom of speech. Or something.

The bad news is this: It's shit. Yes, there are one or two belly laughs (there's a fight in the TV control room that is thoroughly outstanding in its gross slapstick), but it took too long to get going, and once it found its feet it didn't go nearly enough. It takes thirty minutes before they even get to North Korea, and it takes ages to get to the much-hyped Skylark-Kim bonding scene via an all-too-predictable hiding-something-up-your-arse gag.

The trouble is that while the main character (James Franco as the Richard Madeley-esque Dave Skylark) is meant to be unlikeable, he's so detestable you actually hate him within the first five minutes and things really don't improve. Seth Rogen as his put-upon producer turns in a far better performance, but he's underused and the film suffers for it.

But you can see why the North Koreans hate the film. Quite apart from encouraging revolution in their country, plotting to kill their Supreme Leader and suggesting that he has a fully functioning bottom, claiming that he gets tearful over a Katy Perry song is enough to take East Asia to the brink of nuclear war.

So, piss-poor comedy, gets better toward the end, but hardly worth the diplomatic tensions that it has brought upon us over the last few weeks. Could - and should - have been better. In fact, I then went on to watch A Million Ways To Die In The West, which - while hardly the greatest comedy in the world - packs more jokes and at least knows how to do smut without being a bit creepy. An adequate palette cleanser following a plateful of turds, if you like.

Kim Jong Un: Stand down the missiles, there's a good chap. It's not worth the fury.

Also, they had the wrong type of helicopters, because there's no way North Korea flies American Sikorksy S-61 aircraft. And to think you can buy a second-hand Mi-8 around $1.75m these days, small change out of a big movie budget.

Gets an extra mark for having a cute puppy.

It did occur to me that it was such a Christmas turkey that Sony attacked itself just to get the publicity and make everybody want to watch it to get some of their money back.

It didn't work because it was all over Pirate Bay within 24 hours. Serves them bloody well right...

Perhaps I'll nominate them on ISAC?