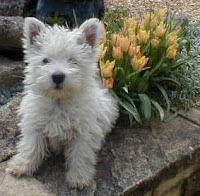 My copy of the Teachings of Buddha - stolen from an incredibly expensive Tokyo hotel room - has much to say on the notion of Karma.

Karma, it teaches, is the balance of good and bad deeds, thoughts and actions throughout the many incarnations of the soul. Good that is displayed in one life may be rewarded in the next, until the soul may reach the ultimate goal of enlightenment.

In our modern age of 'take, take, take', we demand and expect our karma to arrive instantly. And so it does:

My charming wife has a high tolerance threshold for stupid animals. After all, we have been married for the best part of sixteen years, and only one member of the household has ever shat in a plastic carrier bag in the garden shed.

However, we had a small, hyperactive West Highland Terrier that tried even her patience.

Harry Minogue would jump on anything, try to screw anything, and then try to eat it. If all that failed, he would piss on it.

As thick as pigshit - he still looks behind the TV after natural history documentaries to try to find out where all the animals have gone - he would piss everywhere.

Nothing was safe. Arrive home with bags of shopping, you'd leave them on the kitchen floor for a few seconds, only to find them dripping with dog wee, a repentant H. Minogue quivering in the corner, pissing himself with fear.

You wouldn't know him now - he's got new owners and has calmed down considerably into a charming little dog. But in our household, he was a grey-and-white blur that leaked everywhere.

So, on finding a large puddle in the kitchen, for the five hundredth time, Mrs Duck finally exploded.

"WHAT THE BLOODY HELL IS THIS?" she asked of him, pointing to a puddle of guilt next to his heavily waterproofed dog basket.

He did his best to explain by repeating the trick - in her carpet slippers.

"RIGHT! OUT!" she shouted, aiming a bare-footed kick at his rapidly retreating arse.

Alas, she missed, and scored a direct hit with a full-powered haymaker on our cast-iron West Highland Terrier-shaped doorstop.

Result: a broken toe, swelling up cartoonishly to the size of the rest of her foot.

Harry showed his concern for his mistress, now writhing in agony on the floor of the kitchen, by puking rich, brown Pedigree Chum-flavoured vomit ("YAAAAAAAAAARCH!" he said, only in dog) onto her already soggy slippers, which I was subsequently required to burn.

Animal cruelty: IT DOES NOT PAY

His replacement, the extremely cute ickle Lucy Minogue has only ever been to the toilet in my footwear. But she so cute!
Posted by Alistair Coleman at Friday, January 11, 2008