The wretched financial situation in which we find ourselves is hitting each and every one of us hard. Of course, we are all doomed to repeat the failures of the past, and as these recently discovered diary exerpts prove, we've been around the block a few times already: 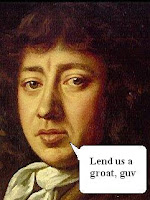 October 1st 1668: Up betimes, pay'ng very little attention to myne affaires, spent ye afternoone hav'ng a new wigge fitt'd (£0 8s 3d) before meet'ng myne gd friend Newton in Stepney. I gave him dinner of ham, braines and turnip (£0 2s 5d) before carous'ng around ye taverns and bawdy-houses of ye East Ende of Our Fair City (£3 11s 2d and a fath'ng).
Spent myne final groat pleasuring Scabby Sally of Shoreditch afore realis'ng that much of our carous'ng had been on ye tab, and neither Newton nor myselfe have a penny to our names. Several large fellows from ye tavern gave me such gd advice to whit: Paye up by Friday or my manhoode will be cutte off and thrust where ye sun doth not shine.
Woe! I am greatly attach'd to my pecker and it wld affect me greatly if it were sent to Manchester.

October 2nd 1668: To myne offices to finde funds to pay my debt to the several taverns and bawdy-houses. Alas! Mr Cuthbertson, who keepes my bookes informes me that myne total assets equal approximately thus: £0 0s 0d and a fath'ng, which he stole from a blind supplicant this morrow. Mr Cuthbertson also informes me that I have not paid him since April, and will happily wield the knife which will remove my append'ges.
Pleasur'd Scabby Sally again, she being ye only slattern in all London who is will'ng to do the job on tick. Alas, she also gave me a dose of ye crabbes which itch like ye devil's worke.

October 3rd 1668: Up betimes and to a local apocathary to obtain ye Blue Unction for my ravag'd parts, ye only relief I cld get com'ng from the constant applicationne of a sprig of hawthornes. Alas, ye Apocathary tells me I owe him £3 16s 2d for other treatments to my trouser parts, and thynges being as they are, wld like his pounde of flesh, viz: my trouser partes on a plate.

October 4th 1668: To the chambers of My Lord Downing to ask an advance for services render'd, sooth'ng my manhoode in a bottle of his fin'st French Brandy whilst his back was turn'd. For woe, he has uncover'd ye truth, viz: I have not done a stroke of work these last seven yrs, my bookes being fulle of sketches of nak'd wenches I'd like to bone, and he show'd me ye door. Then he show'd me ye street, face first.
On arriv'ng home, found several large gentlemen from ye taverns com'ng to request their monies, several carry'ng large torture implements borrow'd from ye Tower. They shall return on ye morrow, where I fear I shalle be undone.

October 5th 1668: Myne final hope has receed'd, Mr Howard Brown inform'ng me that his bank'ng establishm'nt being unable to advance me fundes as I am, in his wordes "sub prime and yr bollockes smell of brandy". Thought of flee'ng to ye Americas, but accost'd by Scabby Sally's brother and frogmarch'd home where a large crowd of creditors await'd, along with a man sell'ng sausages onna stick.
As the burliest of these brutes approach'd my saviour arrives in the shape of my lovely Mrs Pepys, who has promis'd that each and every man shall be fully paid, in the alley beh'nd Threadneedle Street, with "a goodly portion of ye family jewels", allow'ng them a "goode poke around my purse" for gd measure.
I knowe noth'ng gives her more pleasure than to settle my debts, as her squeals of delight cld be heard across much of ye City, and a gd number of men did pat me on my back and tell me I had chos'n "a right one for my old lady". I know not what a "spit roaste" is in financial parlance, but by all accounts Mrs Pepys is particularly adept.
And so to bedde.

October 7th 1668: Up betimes, and to Church to give thanksgiv'ng for my deliverance. Find'ng myself to be ye poor of ye parishtook £3 18s 9d from ye poor box, and will make use of it this even'ng. Mrs Pepys stay'd at home, my treasure tell'ng me that she had unfinish'd business with several large gentlemen from Spitalfields market, so I pray'd that Scabby Sally's various ailments wld clear up. Later carous'd with Scabby Sally. Alas, my prayers were not heard.
Posted by Alistair Coleman at Thursday, October 16, 2008