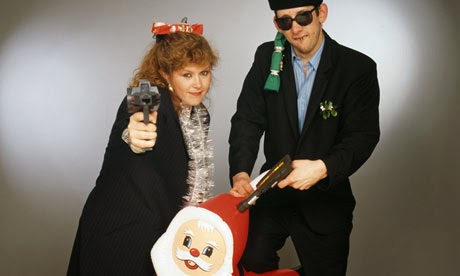 To B&Q to spend an improbable amount on a new bathroom, my attention drawn away from the salesman by the low quality in- store music.

Now, I've written about B&Q's music before, specifically how they take medium sized hits and album tracks and throw them to a covers band to make almost-but-not-quite soundalike versions which are inflicted on the general public. The result is a cross between "Hey - I know this song. But that's not The Verve, is it?  Is it?"

So, as the chap was trying to find the second cheapest bath taps on the computer system, the immortal opening line came from the speaker system: "It was Christmas Eve babe, in the drunk tank...

Jane: "That's not actually The Pogues, is it?"

Me: "Can't be. He doesn't sound like he's been gargling with gravel and vodka"


Jane: "That's not Kirsty MacColl either. More like WORSTY MacColl"

Then came a version of Merry Christmas (War is Over) that made you want to start a war.

Never change your music, B&Q, it's a conversation starter.
Posted by Alistair Coleman at Monday, December 23, 2013

Pretty much every version of Merry Christmas (War is Over) makes me want to start a war.

I'm so distraught I can't be arsed to provide y'all with a live hyperlink to that page.

I too wish to start wars in retribution for aural assaults by poor covers of classics. Alas, Mr. Duck, any war would, at best, result only in a pyrrhic victory. The real ones cost more and the resultant expense would be transferred straight through to the consumer. I know how these capitalists work - the filthy swine!

I would, however, quite enjoy a cover of the Electric Six classic by, say, Iron Maiden or perhaps Megadeath.
Innit?

Yep - you just correctly identified why this little gem was written..

Robin: We got a Christmas card from her. She called me "Pete". We sent her one back from Dave.