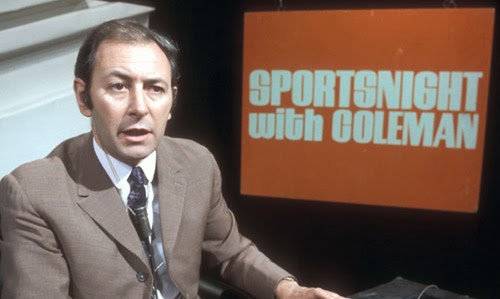 My name is Alistair Coleman. On first meeting, some people will immediately ask me the question "Any relation?"

If they're of an older generation, they're asking me if I'm related to the film actor Ronald Colman, who is without an 'e' and therefore a blasphemer.

Otherwise, I am being asked if I am related in any way to David Coleman, the sports broadcaster who died recently.

After a short period of denial, I decided to pick it up and run with it.

The lie is only an off-shade of white. While my uncle is David Coleman, he just isn't THAT David Coleman. My uncle Dave worked in an oil refinery, was a damn fine artist and once rebuilt an old school house with his own hands, turned it into an art gallery, before selling it as a community art project. He's a damn fine man, just not the most highly esteemed sports commentator of our times.

Like most great lies, it would eventually come back to bite me on the backside.

Jesus Geoff, for example. He was called Geoff, and he had a friend in Jesus. he was one of my best friends when I worked at the Ministry of Cow Counting, despite the none-less-fashionable jacket/tank top/mullet combination. Unfortunately, once the David Coleman connection was made, he simply would not let it lie.

What didn't help was that David Coleman was pretty much a fixture on Spitting Image at that time, and the latex Coleman was often seen with a finger to his ear-piece letting forth with a Chris Barrie-voiced "Errrrrrr..... quite remarkable!"

You could hear it from a good fifty yards away. The Ministry of Cow Counting's offices were HUGE, and when I walked in through the doors by the lifts in the morning, Jesus Geoff would be nothing but a mulleted speck in the difference. But the "Errrrr....quite remarkable!" could be heard halfway to Edinburgh.

The "Errrrrr....quite remarkable!" would follow me everywhere. Even several years later, having fled the Ministry of Cow Counting for a life in public service broadcasting that didn't involve contact with our bovine chums, a trip to the local big hypermarket resulted in this exchange, at a range of about thirty yards:

Geoff was fine, so was Mrs Geoff (for whom he converted to Jesusism in order to pursue her romantically), but his quite-remarkabling still left a lot to be desired.

However, top points to me for remembering not to call him Jesus Geoff to his face. No points for him for chasing me half way across Savacentre* doing a bad impression of someone doing an impression of David Coleman.

And now he is gone (Not Jesus Geoff - as far as I know, he's still with us), commentating on the great Olympic Games in the sky. Nelson Mandela's just won the shot putt final with a record heave. Errrr... quite remarkable!

* Nobody - but nobody - in Reading calls the big Sainsbury's in Calcot Sainsbury's. It was opened as 'Savacentre', and it will remain Savacentre long after the bulldozers move in. Ditto the so-called Broad Street Mall. It's The Butts, and will be called that forever, arse connection or no arse connection.
Posted by Alistair Coleman at Wednesday, December 25, 2013

..." It was opened as 'Savacentre', and it will remain Savacentre long after the bulldozers move in. Ditto the so-called Broad Street Mall. It's The Butts, and will be called that forever, arse connection or no arse connection. "

I live in a house built in the late 70s and am the third owner, and have lived in it 20 years. But to all the locals, my house is still known as "the [insert first owner's name] House", even though they moved away 26 years ago. Such is the memory of humans.

Our house is "The one next door to the one that was raided a few years back. You should have seen the plants that came out of there. And the smell!" It's a bit long when you're trying to give directions though.

I reckon this guy does:

YOUR BLOG SUCKS AND THIS WEBSITE SUCKS.
SUCK IT.

PS: THE NAME IS FUNNY THOUGH

I WILL HARASS YOU UNTIL YOU DO
EVERY
BLOODY
DAY

I love you too, Anon, you and your sexual inadequacies released through the medium of anonymous trolling.