The Google Zeitgeist, and why we are doomed 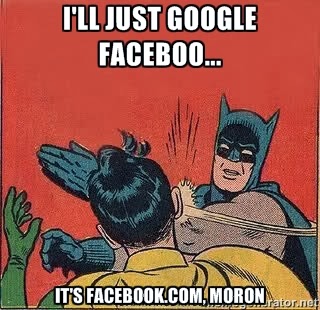 Google recently released its so-called 'zeitgeist list' – the top ten search terms for 2013. Let's have a look at the results for the UK portion of the exercise and consider the implications:

And the main implication is this: Society is doomed.

The top five results on this list can all be found simply by adding .com to the name. But it's clear that many, many people do not know this and get to their Facebook accounts by Googling for Facebook.

Saints preserve us, nearly as many people look for Google by Googling Google, a practise that risks an infinite causality loops that could actually bring about the end of the universe. And every now and then, the site they want isn't the top result. Which means the "I'm feeling lucky" crowd end up further away from their Farmville or Candy Crush than they thought, and all hell breaks loose.

Yes, I realise that some browsers now have a url bar that doubles up as a search engine input, but this only encourages stupidity and must be stamped out forthwith.

And yes,  also realise this post is nothing but a stream of techno-snobbism aimed at those who are less computer literate than I. Guilty as charged, and the sooner they bring back the written exam for the internet the better.

And also yes, I realise I illustrated this with that Batman meme, which probably makes me the worst person on the planet.

Email ThisBlogThis!Share to TwitterShare to FacebookShare to Pinterest
Labels: Arsing about on the internet, idiots

'Researching the Facebook use of 16-18 year olds in eight EU countries, the Global Social Media Impact Study found that as parents and older users saturate Facebook, its younger users are shifting to alternative platforms.' - The Guardian. 27/12/13
http://www.theguardian.com/technology/2013/dec/27/facebook-dead-and-buried-to-teens-research-finds

Visit to a public library and watch pensioners using keyboards without clicking on a text entry box and then showing surprise when nothing happens on pressing .
On the other hand
Watch secondary schoolkids using a calculator to find the square root of 16.

There is hope, Mr. Duck, at least "lolcats" wasn't in the top ten this year.

YouTube = bans my videos and when I appeal responds in 45 seconds after eviewing a 4 minute video. Hmm...

Google = intends to take over the world!

Argos = waiting to be taken over by Amazon

Yahoo = waiting to be taken over by Google

Conclusion : They're all shit and we're doomed!

This is terrible, I am not in the top ten, I guess I must be number 11.

Daily Mail Why, Who,

I still can't get my head around people googling google, and that google doesn't respond with a message along the lines of 'You're already here, you fuckwit!'

If one is using Internet Explorer one will have to search "Google" if one wants it.

Dioclese: BBC = Biased Bullshit Corporation --- I would beg to differ.

ALTC: You would have failed the exam.
If you're on the Scary Duck page, look at the top of the screen. On the left you should see a duck icon followed by 'http://scaryduck.blogspot.co.uk/ . Click on that block of text and key in google.com. Hit the Enter key and watch how, as if by a miracle, the Google page appears. Stare in amazement when you click on the down pointing triangle to the right of the url box.

Alistair, I would be intrigued to know why?

As has been consistently my lot in life. Accordingly, sexual favours were always proffered and passing grades accrued.

I start typing bb in the address bar, and bbc.co.uk appears, and I press enter!

Commonly used sites only need looking up, at the most, once.