On Them Buying Any Car

On Them Buying Any Car

FACT: The words "dot com" on the We Buy Any Car adverts are voiced by none other than Prof Stephen Hawking, who returned a favour after they took an old Mini Metro off his hands.

Noted for his versatility in the advertising world, Hawking's is the voice you hear screaming "HI! I'M BARRY SCOTT!" on the Cillit Bang commercials.

And by running himself through Google Translate, he also does the German version: "BANG! UND DAS SCHMUCK IST WEG!"

Readers will be intrigued to hear that the concept for the We Buy Any Car is nothing new – this business model was first noted around the time of the Norman invasion as this never-before-seen panel from the Bayeux Tapestry proves, and is still going strong. 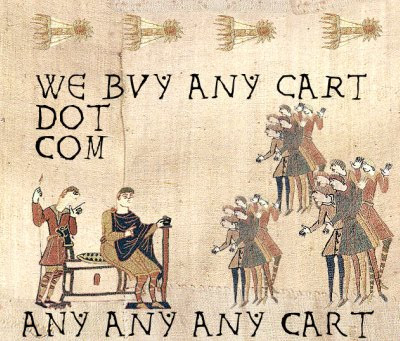