You've all seen these things bobbing around on your Facebook timeline. And we all know they're crap with their hokey sayings, awful poetry and pictures of minions. But I've got one question regarding this one: 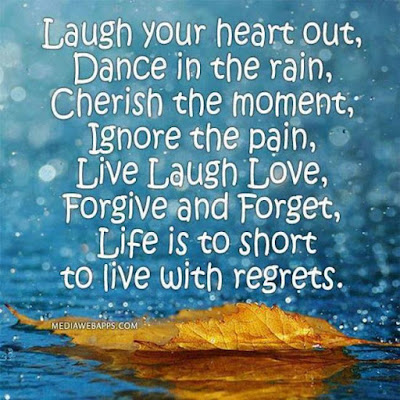 Dancing in the rain is cold and miserable, and once the wet stuff starts seeping down your neck, all you want to do is find that person who suggested that you should try dancing in the rain, and smash them over the head with your best dancing shoes.

Also, people will see you dad dancing and may probably call the police because only weird people dance in the rain that badly, and you're probably out to do something unspeakable to their kiddiewinks. You'll end up in a cell for the night, cold, wet and shivering, and accepting a police caution on account of your bad dancing disturbing the peace.

Dancing in the rain: Don't try it.

And it's "TOO short", you cretins.
Posted by Alistair Coleman at Sunday, November 22, 2015

If it's any help, dancing in the rain is Ok in places like Puerto Rico except the sheer quantity of water tends to make your ears ring. Or was that the thunder?

It's tap dancing with the tap on.

I tried it once. I was pissed at the time...

I don't want no diversion, I don't need no bread and jam
I wanna breathe the air and be exactly where I am
And if you think that's weird, well you're insane
You never even danced naked in the rain

As the peot sang. And a good thing too. No-one wants to see that.