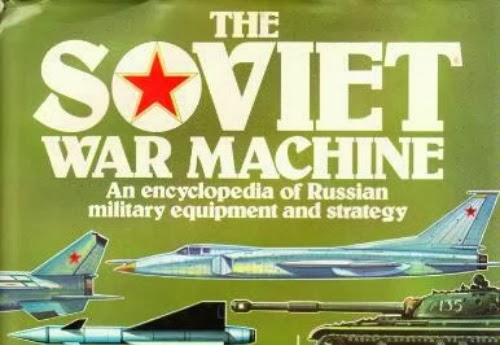 I mentioned a couple of weeks ago that I had fallen under the thrall of Mr Alastair (Can't spell Alistair) Murray and his book Watching War Films With My Dad.

(Mini review: Entertaining memoir with potted history of vital parts of the Second World War serving to illustrate how we look at history. Also, massively confusing for anybody expecting Pub Landlord blokeness)

It's a book that caught my interest because we're about the same age (he is a mere youngling, born two years later than I), and – it turns out – both our fathers have an interest in military history that they passed onto their sons, unwittingly or otherwise. In young Mr Murray's case, it was in the form of weekend afternoons in front of the television, disassembling war movies for the historical blunders and inaccurate kit.

In my case, it was a study wall stacked from floor to ceiling with books on every kind of warfare from ancient to modern, delivered a month at a time by the Military Book Society.

The Military Book Society was (until it was entirely killed to death by Amazon) one of those myriad book clubs that offered you five-for-a-pound each on the back of the Radio Times, before sending you a full-priced book every month until Hell froze over or you remembered to cancel your subscription. I gave The History Guild a bit of a go in its dying days, but it wasn't the same as the Big Daddy of them all: The Military and Aviation Book Society.

What actually killed off my membership was the opening of a discount book store in the centre of Reading that traded solely in the returns from the WH Smith book societies for about a quid each. Clearly the forerunner of The Works, which is a feature of every High Street now with its piles of remaindered stock from the big chains, you could pop into this scrappy little place up Smelly Alley and grab yourself the previous month's editor's choice at a knockdown price, as long as you didn't mind it looking like someone had kicked it from the floor of the warehouse into the back of the delivery van.

On the down side, you had to wade through shelf after shelf of utter pap that was offered by groups (and I'm going to have to riff on this) such as The Large Print Romantic Fiction Society, The Crap Autobiographies Of People You've Never Heard Of Club, and The Rip A Book In Half And Send It Back Guild, so you often had to spend hours at a time in there to pull out something decent. Over the months, I pulled out almost the entire set of the Oxford Histories of England series for a fraction of the cost. Last seen going into a loft space in Weymouth, heaven knows where they are now.

My dad's membership of the Military Book Society (he had pips on his shoulder as a Lieutenant Colonel in a Territorial Army medical unit) brought me a lifelong interest in the world of warfare. While the young Al Murray was brought up on World War Two, I allowed myself to be terrified by the Cold War.

The old man was expected to be at the sharp end if and when the Cold War became hot. An avid reader of military analyses posted through our door every month by TMABS, I fully expected this to come at any time during the early to mid 1980s. In fact, as 12th September 1981 came and went – the day I confidently thought Armageddon would come – I felt thoroughly cheated. Every summer, he and his unit were carted off to somewhere in Germany for two weeks, where they were exercised in what to do when the Soviets came rolling over the border. Put bandages on everything, then try not to get killed, I suppose.

My contact with his TA unit was usually sitting bored outside the officers mess at either Chelsea Barracks or somewhere in Harrow, being brought an Indian Tonic Water to drink because "it's all they had". Boredom would then give way to a huge game of hide-and-seek around the Duke of York's barracks, usually until some massive sergeant shouted at us for arsing around in a military facility when the Russians were about to turn up and kill us all. As the offspring of an officer, we got away with an awful lot that's probably horribly illegal under some knee-jerk post 9/11 legislation. Hey - a little bit of politics, there...

So, part way through Mr Al Murray's description of Operation Market Garden, known to everybody else as A Bridge Too Far, he throws in a mention of one of the influential protagonists, (then) Brigadier John Hackett who (and I quote) "wrote a doom-laden book about the Third World War." 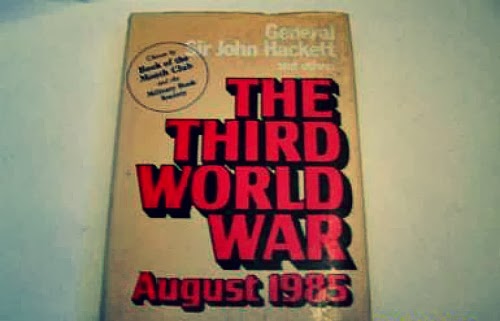 BLAM! General Sir John Hackett's so-called future history called The Third World War – written in 1978, but set in 1985 – did it's very best to scare the utter shit out of me. Hackett – a war hero who rose to become Deputy Chief of General Staff – can be safely assumed to know a thing or two about military and political strategy and how a conflict between east and west might pan out. With these credentials, he wrote a book mixed with realistic military and political manoeuvrings, mixed with diaries from those on the ground as the Soviets, in one final throw of the dice, hurled a nuclear device at Birmingham.

Now, there are people out there who would say the Sovs were doing us all a favour re the Birmingham unpleasantness, but in my teenage mind the realism of the situation and the fact it could (and very nearly did on several occasions) happen paralysed me throughout what were supposed to be my formative years.

A second book – The Soviet War Machine – helpfully expanded on Hackett's point by illustrating, in handy pie-chart form, exactly how large the Soviets' nuclear warheads were, and how many more of them they had than us, and – frankly – how keen they were to use them against we quivering lick-spittles of the American capitalist dogs.

The Soviet War Machine was published in 1976, and came with loads of big pictures of tanks (of which they had many, many more than us); big, fast spiky-looking jet aircraft (ditto); heavily-armed ships and submarines (ditto) and loads and loads of nuclear missiles with names like Scud, Satan, and Savage. We were – according to The Soviet War Machine – utterly fucked.

So, thanks to Murray's passing reference, I sought out The Third World War and The Soviet War Machine on Amazon and bought them both. Evenings are now spent half laughing at the puny backwards state of 1970s military technology, half terrified that when the Chinese invade, I'm going to be sliced into very small pieces by a third generation killer robot.

On the bright side, both books cost a penny each, plus a £2.80 delivery charge. In your face, bargain bookshop up Smelly Alley.
Posted by Alistair Coleman at Tuesday, November 26, 2013

Anyway, I just wanted to say that after my darling child, every single time we go to the Imperial War Museum London at Elephant and Castle (formerly known as The Bethlem Asylum for the Insane aka Bedlam), insists on triggering and listening to the whole of the Protect and Survive video loop in the Col War display purely because he knows that the beepy boopy ident they play at the start and end of the broadcast shits me up royally every single time I hear it having lived through that particular era, has been thoroughly traumatised by his last Christmas present which was a DVD collection of Threads, When The Wind Blows and The War Game. He is now thoroughly traumatised and Christmas holds a dread for him from which he will never recover. I consider my job as a parent complete.

Oh, and The Day After.