The relentless search for a better rectal thermometer 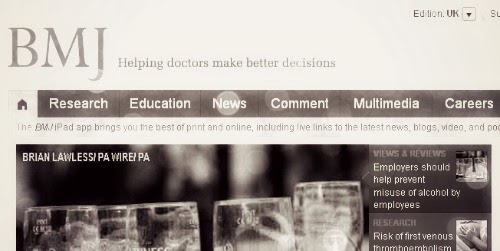 I go to publishing industry trade fairs every now and then, and every time I'm drawn like a magnet to the stand run by the British Medical Journal, the nation's number one publication aimed at doctors, medical researchers and the kind of person paid to stick a camera up your bottom.

I'm not a doctor, I don't work in the medical profession, and I've got no real interest in stealing their promotional pens and drink coasters, but it's a fanboy's instinct that drags be endlessly toward them, because – dammit – I heart the BMJ.

With both my parents working in medicine – my father as a doctor, retiring as a professor; my mother as a State Registered Nurse in the days when it was actually about the patients and not hitting performance targets – every week brought something new through the door.

Mum subscribed to Nursing Times, a weekly magazine filled with hideous skin complaints and there caring thereof. Dad got The Lancet ("the world's leading general medical journal") and the good old BMJ. The front cover of the BMJ invariably had a photograph of something hideous, which doctors were urged to identify as some sort of Nauseating Disease Of The Month Quiz answered on the following pages.

Comedian Al Murray's recent memoir "Watching War Films With My Dad" tells of how he gained his obsession with wartime history from his father's influence. Much the same, I'm into military history – particularly Cold War – thanks to my old man's membership of the Military Book Society and an impressive bookshelf of tomes about interesting ways of killing people. I could tell what make and variant ANY plane is - whether NATO, WarPac or otherwise - when it's the size of a fly on a ceiling; and I'm fully versed in tanks, ships, submarines and how to make a nuclear weapon. I once won a trophy for aircraft spotting without really trying, which was the smuggest moment in my life. Thanks, Dad.

But also, it's the medical stuff that's grabbed me for life in the same manner. Which is weird, because I had absolutely no intention of following my parents into the medical profession, hate the sight of blood (anybody's, but especially my own), and will insist on being out cold if I am to be the victim of any medical procedure.

The fact, then, that the so-called sedation for my recent colonoscopy left me fully conscious came as a bit of a shock, for I have no curiosity to see my insides, especially not on a 42-inch widescreen television just feet away from my face. The only thought going through my mind as my bumhole hove into view in glorious high definition was this: "What if they're piping this across the entire hospital, just for a laugh?"

"Are you piping this across the entire hospital just for a laugh?" I asked Dr Singh as the rusty sheriff's badge assumed frightening proportions on the screen in front of me.

"No, but we'll be selling DVDs in the cafeteria later. This won't hurt."

He was wrong. It did hurt, the biggest injury being to my dignity. I never want to see my arse, and especially not the inside of my arse, on the television ever again.

What it boils down to is this: I've got an interest in medicine, its research and its application, just as long as it doesn't apply to my no-longer bullet proof body. And, damnation, I thoroughly dislike it when people are wrong.

That's why I'm obsessed with the quackery that is increasingly influential these days. Expertise is a much-maligned thing these days, so I am a huge fan of science-based medicine with no patience and very little tolerance for the type of anti-vaxxers who – despite the overwhelming landslide of evidence to the contrary – still think that the MMR vaccination causes autism (It doesn't, you twats, and I won't even engage you in discussion if you think differently).

But back to the trade fairs.

"I think you're really great. Can I have a biro?"

"That's not a biro. It's a promotional rectal thermometer."

Email ThisBlogThis!Share to TwitterShare to FacebookShare to Pinterest
Labels: Al Murray, doctors and nurses, having a camera pushed up your bottom, homeopathy

"promotional rectal thermometer" Does it project an advert onto the wall when inserted?

I had one and it was completely painless although I'm still trying to figure out what 'right side diverticular disease' is.

It was afterwards I had the problem. They pump air in front of the camera so that it open up the bowel and they can see better. That air has to come out again. I had stomach cramps and farted violently for several hours...

Dioclese: When they wheeled me out, I asked if I was going to "the farting room now"

Thinking a rectal thermometer is a biro is probably a better class of mistake than the other way around, you know.

My best score from a medical convention was the highlighter pen advertising asthma medication that had a disclaimer printed on it, "Pen does not contain medication."

"Damn! Asthma attack coming on! Just give me a second while I mark yellow all over my face..."

Adds a whole new meaning to "go and stick it where the sun don't shine!"

The newest bit of woo I heard about-- get this --is a guy who charges you to sit in a room filled with Himalayan pink salt, so you can benefit from the "healing properties" of the ions the magic salt generates. Snake oil all the way.

Amy P: It works by removing evil numbers from your bank account.

I'm reminded of a joke that I can only partially remember. It goes something like a nurse asks a doctor to sign a form the doctor pulls out a rectal thermometer instead of a pen and says "If I've got this here what did I just shove up Mrs Smith's backside?"

Barry the way I heard the punchline is : "Oh, great. Some asshole's got my pen."