A list of the six worst James Bond films, and you are WRONG 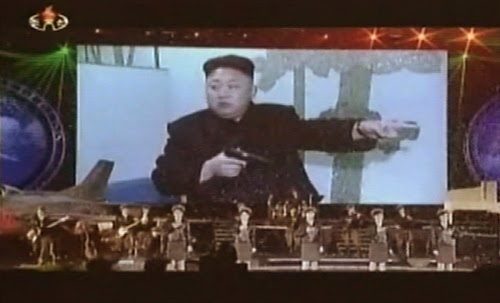 "Do you expect me to talk?"

So ends Kim Jong Un's latest attempt to make it as a James Bond baddie.

But we digress already. After this week's skewering of A View To A Kill, we lay down THE LAW on which are the worst half dozen of the Bond films. And the rules are simple: Never Say Never Again is canon, Woody Allen Casino Royale is not. The judge's decision is final, and you are WRONG. 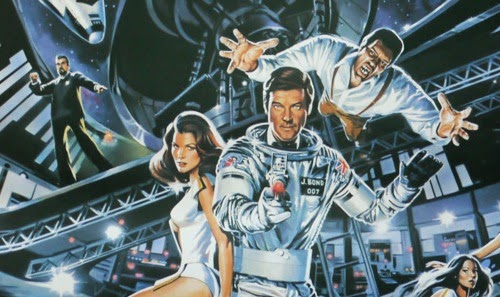 6. Moonraker
A desperate cash-in on the late-70s sci-fi boom, Bond flies off into space to defeat the nefarious Drax, mad scientist writ large. Utter mumbo-jumbo, it features Jaws, the Jar Jar Binks of the international assassin network. The only redeeming feature being Q's " I think he's attempting re-entry sir" line, voted double entendre of the year. 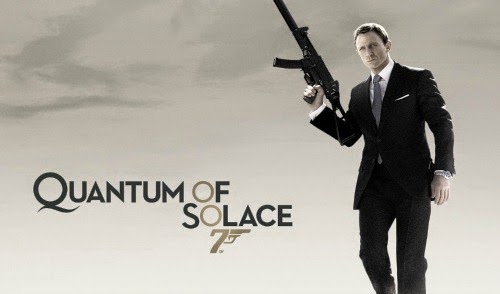 5. Quantum of Solace
Even at a mere 106 minutes, Quantum seems to outlast its welcome by at least an hour. The point about Bond films is that there's some sort of dire danger to all mankind (or at least the British and American parts of mankind) that only 007 can unravel through his charm, guile, and – where necessary – extreme violence. In Quantum, the charm and guile is all gone, and the whole thing seems to be based around a bad guy hoping to mildly upset humanity by laying a turd in every 10,000th Kinder egg. Big budget, little Bond. 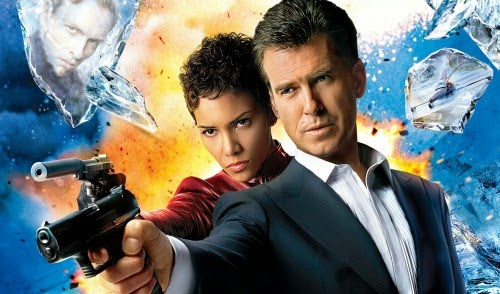 4. Die Another Day
This one could be the best film in the entire world, but loses everything it has going for it for the shoehorning in of Madonna and the invisible car which was about the most bollocks ever seen on a cinema screen ever. Bond films are supposed to be fun, and I was rooting for the bad guy. 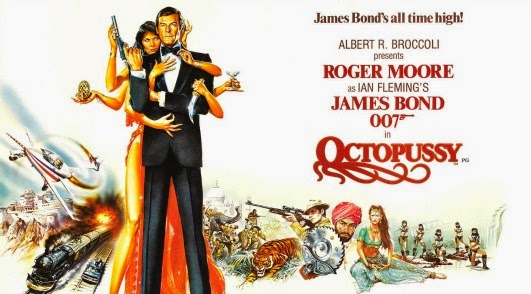 3. Octopussy
In which writing duties are given to one of my literary heroes – George MacDonald Fraser of the Flashman novels. Instead of Flashman, poor old George turned in Limpman, and a climax where Roger Moore is defusing a nuclear bomb while dressed as a clown. Before that, you have the tennis gag scene, seemingly shoehorned in because retired tennis player Vijay Amritraj is in the cast, and his character dies soon after, possibly of shame. 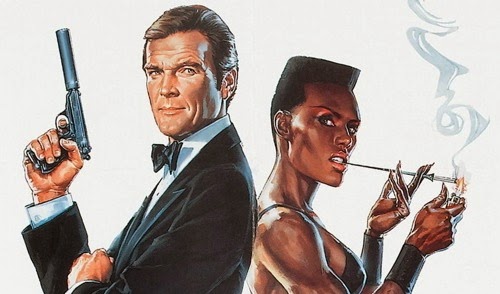 2. A View To a Kill
In a list which is rather Roger Moore heavy, we turn to his last outing as Bond. I've covered what is wrong with this film (everything) yesterday, but leave you with why even Moore though it was one Bond too far: He was older than his Bond girl's mother. 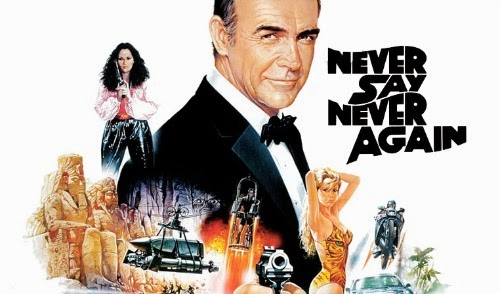 I will never entertain the fact the Connery wore a hair piece for his outings as Bond, but just to make sure I photoshopped his hair out of the publicity poster.

But for the film itself: No double entendre left unturned, no plot stretched to breaking point, no horse-jumping-off-a-cliff too ridiculous, this remake of Thunderball (hardly the greatest of source material), seems to go on forever. However, the one scene that makes this the worst of Bond by a clear street is the computer game duel in Largo's casino. To say that scene hasn't aged well is an understatement - even when it was first screened it was like a punk band on Songs of Praise, and trumps Rowan Atkinson's ridiculous swimming pool plunge at the end for sheer cringe-making awfulness.

Never Say Never Again turned a $125m profit at the box office. So what do I know about good taste? All this proves is that the early eighties were Bond's darkest years. He was only ever any good with a Labour government.
Posted by Alistair Coleman at Friday, April 25, 2014

I like Never Say Never Again. I found the villain a refreshing change from the usual fare of the time, and the motorcycle bit is good.

A View To A Kill represents the greatest disparity between film and theme quality though (one shit, the other great).

You must be jchoking! That's how Sean Connery says it and it's HOW IT IS SPELLED.

What are the six worst
On The Buses and Rising Damp films?

This is all very well and good, Scary, but tell us who was the best Felix Leiter? I'm sure your readers from the Revolting Colonies would ever so love to reap your wisdom on this.

How's about a list of the Six worst Carry On films?

Carry On Emmanuelle is canon for this series I reckon. Specifically for the fact that you are forced to experience Kenneth William's bare arse. The viewing of which, in no small way, was responsible for causing me to lose interest in tradiola for good.

Actually, I thought that Never Say Never Again was one of the best Bond films - although the theme music was truly awful.