Everything that's wrong with this giant golden statue of Mao Zedong 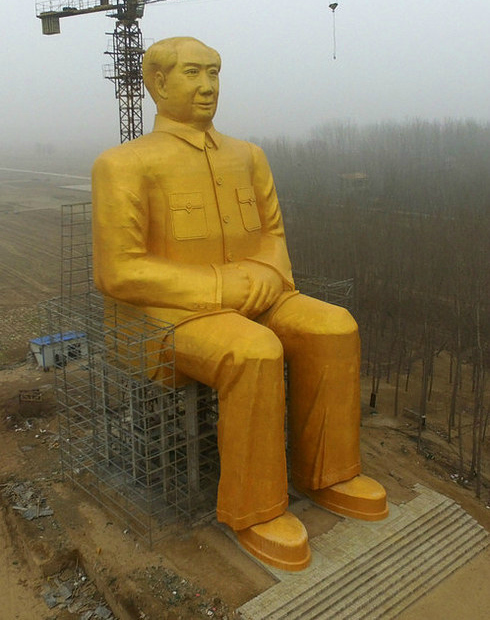 Chairman Mao. He led China through the Revolution, then set about killing millions of his own people through blazing incompetence. Yet you won't hear a bad word against him on the Chinese mainland, mainly because they'll nail your head to the coffee table if you try.

So, clutching my IKEA coffee table, I say that while he was a great revolutionary leader; but he should have left the actual governing to people who had a vague idea of running the show.

So, some incredibly rich people in one of China's poorest regions are building this - frankly - massive golden statue of the long-dead statesman in his honour.

Note, if you will:

The head. It's too small and looks nothing like him. As if it was posed by someone who bears a passing resemblance, surprised by a loud noise from a passing car

The spare head. Which DOES look like him, but two heads on a statue aren't a great look, unless celebrating the life of Zaphod Beeblebrox. 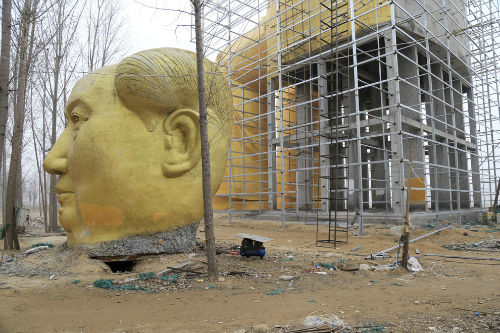 The trousers. As Danny Baker has repeatedly pointed out down the years, "Monumental statuary died with the advent of the trouser", and here is all the proof you need. Shoddy trousers in extremis.

The knees. Look at those knees. Seriously. Nobody has knees that sharp. Brush up against those knees and you could get yourself a paper cut.

The shoes. They look like they were issued to Mao by the physiotherapy department of his local hospital. Or, we have just discovered his secret double life as a member of Showaddywaddy.

The sofa. Mao liked nothing more than to sit in a nice comfy chair on a Saturday afternoon, doing his pools coupon before Doctor Who came on. This is not his comfy chair. One suspects that when finished, there will be a flush handle.

Cheese. It's not made of cheese, despite being cheese-coloured. Schoolboy error.

And - yes - the fact that they built the thing in the middle of the countryside worst hit by famine when The Great Leap Forward resulted in mass starvation. Good move.

Chinese millionaires: If you really want to commemorate the man's memory properly, change your cat's name to Chairman Miaow like everybody else does.
Posted by Alistair Coleman at Tuesday, January 05, 2016

Over Christmas there was a piece on the news saying that The Man was intent on recreating the Colossus of Rhodes. Once the inevitable questions were out of the way for e.g. "how can Greece afford such fripperies when its economy is well and truly in the shitter" and "why" I noted that it paled into insignificance behind the Scaryduck Great Five Year Plan for Weymouth involving giant statues of the Minogue sisters. This earned me a Funny Look from my brother-in-law.

This statue is just as much of a Rubbish sh as the Colossus of Rhodes idea. Minogues ftw.

It does beg the question of what's inside his golden trousers? Golden balls, perhaps?

The constructors failed to get correct planning permission and the statue is in the process of demolition. They think it's all over. It is Mao.