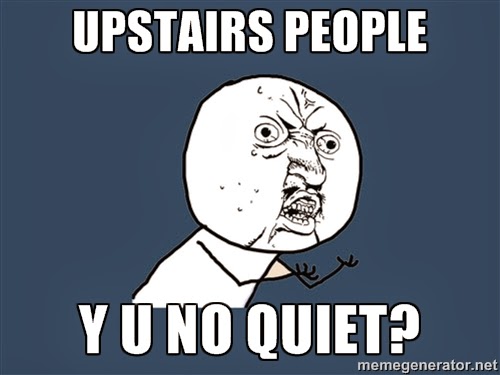 "So," I said, barely able to hear myself think, "Should I get a broom and bang on the ceiling, or something?"

We were, at that point on that Saturday afternoon, so upset that we were on the verge of almost nearly doing something, for our upstairs neighbour was playing the same song for the third time in a row, and apparently dancing to it while wearing diver's boots.

We decided to give it five minutes, and then - perhaps - we might do something passive-aggressive, such as putting on some music of our own, only nothing too loud.

Like anybody who lives in flats, you can't choose your neighbours and you have to put up with their habits and elephant feet.

Directly upstairs is a single mum, with a toddler who rises before dawn and has Sunny Delight-driven stomps throughout the day. You can also set your watch to her smoke alarm, which is the signal that their dinner is ready and smoking in the kitchen. She sometimes blocks our front path with her baby buggy, and as a result, we sometimes think badly of them.

Upstairs diagonally, you have probably heard of Sky Meat Woman, with her habit of throwing meat products (cooked and uncooked) out of her kitchen window, which invariably land in our front garden. It is - as you might imagine - a major pain in the backside, because you never know what's waiting for the dog to choke on when you take him for a walk on any given night. Just a couple of weeks ago it was an entire chicken carcass. She also leaves her bins out all the time (not sexy slang), and as a result, we sometimes think badly of them.

It took some time to realise that the sky meat was thrown to attract one of the local foxes (we have at least five living on our street), and I got some glorious photographs of my new vulpine pal that we realised that sky meat is not - all told - a bad thing.

I felt bad about feeling bad about Sky Meat Lady. 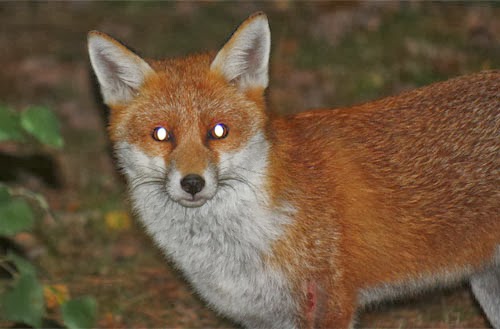 So, the music went on again, and I almost nearly went to the closet to get the broom, but was interrupted by the doorbell.

It was Upstairs Lady.

"Sorry," I said, because I'm English and therefore feel I must also apologise for something, even if I don't know what it is.

And then I felt bad about feeling bad about her.
Posted by Alistair Coleman at Monday, February 03, 2014

You realise that means she can HEAR YOUR THOUGHTS...

Or worse, reads your blog.