The Ceremony Of The Keys 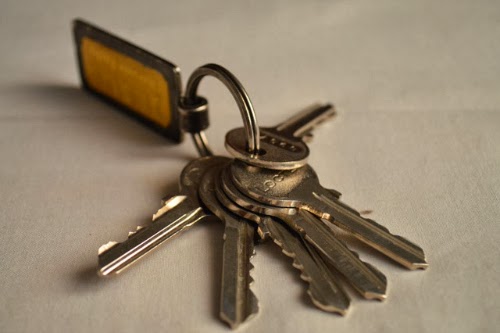 That's sickening click when you shut the front door behind you and you realised you've locked yourself out.

The day started badly enough – my commute to work was nothing short of a disaster, with the heavens opening for the 357th day in a row, the floods shutting off just about every road into town.

After an hour sitting behind a scaffolding lorry, their slogan ("Call us and see our erection!") no longer funny, I gave up the crawl five miles away from my destination and headed for home.

In fact, my day working from home was extraordinarily productive. With nothing else to distract me, I probably got more done in one morning than I have in several years.

So, I decided to reward myself with a good, long lunchtime walk through the Bummy Woods with the dog, and perhaps a cheese and bacon thing from Greggs. Mmm... Greggs. It was that moment of reverie that I blame for what happened next.

It's at that point that you find your hands are either too fat or the letter box is too small to reach through to pull down the handle. Well done, door designers, well done indeed.

Still, look on the bright side. It had stopped raining, and a round yellow thing had appeared in the sky that had ne'er been seen for many a month.

That's when you turn up at your partner's office completely unannounced and threaten the security guard with non-stop singing of "I'm Henry the Eighth I am" (The one thing I took away from the film 'Ghost') until he lets you in so you can ask Jane for her keys.

People came and pointed at me, and I only have myself to blame.

I suppose you're asking how long I was stuck outdoors, and whether my flight to Hartley Wintney to get the spare keys was successful. But then, I'm writing this in the shed at three in the morning, so I can't tell you.
Posted by Alistair Coleman at Friday, February 14, 2014

Email ThisBlogThis!Share to TwitterShare to FacebookShare to Pinterest
Labels: being an arse, getting locked out

Get one of the new locks that need a key to lock them. The new lockable-by-key locks have only been around for 1,200 years so it's anybody's guess if they catch on.

Not into throwing(1) a bit of muck on the old potter's wheel then?