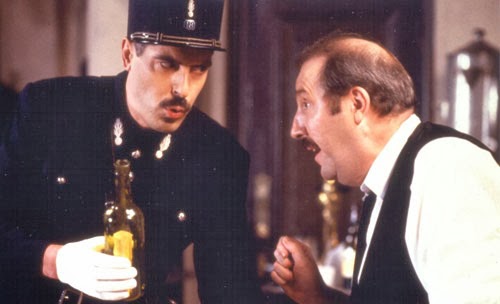 A few years ago, part of my job entailed reading through a monthly newsletter from France's broadcasting regulator looking for traces of news. I've got a basic grasp of French (slightly better than my English, some might argue), and without the benefit of Google Translate, it took me bloody ages.

It didn't help that it was page after page of turgid broadcasting policy that sapped your will to live. But all that was forgotten when you got to the last couple of pages, which were given over to the body in charge of safeguarding the French language.

Here, with full po-faced descriptions, were lists of neologisms that had broken into the French language one way or another, and why these pesky foreign words were now INTERDIT should be  replaced with French equivalents they had just thought up. Not written with the greatest style, I might point out. I dare say it lacked a certain je ne sais quoi.

Oh yes, the French are very protective about their language, especially when it comes to English and (more to the point) American invaders. That's why there's a language quota on French music radio, and that's also why French music radio is largely awful. Notable exception: Radio Bleu, which is terrific.

Now, after several years without this guilty pleasure, I've found it again online, part of the Academie Francaise website.

You too can enjoy their regular "Dire, ne pas dire" column, in which the French people are told off for talking foreign and could you - MAINTENANT - use these clunky alternatives.

Out goes - for example - ASAP, and instead on dit "Répondre dès que possible"

OUT: digital - IN: "Télévision numérique"

OUT: Battle of Trafalgar - IN: "Un draw honourable"

One of these might be made up. But the point is that when you're trying to kill off catchy neologisms, at least show some bloody imagination. I bet the equivalent of "twerking" is "danser avec la grande derriere" or something.

Of course, English is a language that's at ease with accepting foreign words, but it's mostly as a result of a history of invading places and wrecking their cultures.Also, we don't appear to give a crap and will accept any word, no matter what the origin.

However, that means very little when you hear some old chap bawling "TALK ENGLISH!" at people daring to speak another tongue on our shores, before muttering - sotto voce - "Where's the khazi?"
Posted by Alistair Coleman at Tuesday, February 11, 2014

Email ThisBlogThis!Share to TwitterShare to FacebookShare to Pinterest
Labels: french, slightly racist when you think about it

But I am increasingly getting annoyed by the spread of *grits teeth* Save half-price! *ungrits*
Some neologisms are un pas de trop.

I did a little reading about this topic this morning.
This book might be interesting/helpful to you, or at least the Editorial Review of it.
http://www.amazon.com/Sixty-Million-Frenchmen-Cant-Wrong/dp/1402200455/ref=pd_bxgy_b_text_y

I'd be interested to know if those who resist adding English words to the French language are making up their own words and phrases to accommodate the computer/internet age. I mean, most of the computer-words today probably come via (English-speaking) Silicon Valley in the first place. Are the French language police re-inventing the lingo that IT people use amongst themselves, just because they simply must have a French version? It would seem that it would be a disadvantage at a professional meeting or conference.

From what I've read and heard, one reason English is so valuable is BECAUSE it borrows so many words and is so rich and malleable.

Oh well, at least this post made me think about culture and language being tied together more in some countries than others.

Also, the term French Resistance now has a new meaning!

So, a digital wristwatch in French is 'Montre-bracelet la télévision numérique'?

I done a lol