A Fact With Which I Am Currently Obsessed 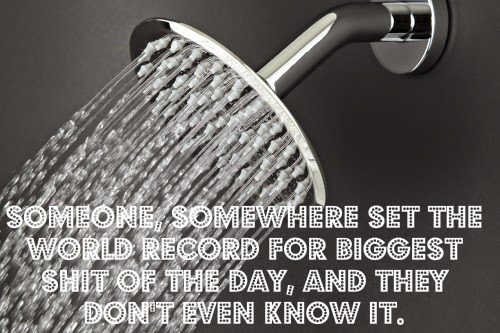 "Someone, somewhere set the world record for biggest shit of the day, and they don't even know it."

That's a damn shame, because if there's an achievement that should be rewarded it's doing the day's biggest shit in the world. And with modern technology, I fail to see why the winner shouldn't be recognised.

Simply fit an RFID chip to every toilet and bottom in the world, along with specially adapted scales and webcams, all transmitting to a network of geosynchronous satellites linked to a central computer system. Then we will know exactly who did the world's biggest poo that day, where they live, how much it weighed, and give them a prize.

I propose two prizes, in fact:


Prizes can be handed out live during the advert breaks during popular soap operas, and the victors get to live like a king / queen / monarch of unspecified gender for a day, before handing their brown crown over to the next winner. Dale Winton to host.

Obviously, sufferers of irritable bowel syndrome will have a distinct advantage in this global competition, which means - for once - I am a world leader at something and therefore in a position to make our country proud where the likes of David Beckham and Mumford and Sons have failed.

Let's do this thing.

Email ThisBlogThis!Share to TwitterShare to FacebookShare to Pinterest
Labels: Going to the toilet, prizes

I could give you a runs for the crown.

A prize for the longest turd is better as it can't be faked. The winning poop could take pride of place at the entrance to the Natural History Museum.

I have to wonder if it's possible to ingest material at a rate sufficient to maintain the rate of turd production such that a truly continuous turd is produced.

I heard that "dun a ton" cheats. He takes a bucketful of Senokot - extra strength" every day.

Bizarrely, I have often thought this myself. There should also be a prize for single biggest / heaviest turd of the day. That would have my name on it. As it were.