In 1972, David Bowie released his fifth album, The Rise and Fall of Ziggy Stardust and the Spiders from Mars, a concept piece about a rock star who acts as a messenger for extraterrestrial beings. The song Five Years tell us their message - Earth has just five years left, and it will be destroyed.

But we ask, is this the real message of the album? Perhaps - we ask - the real answer to the album's prophecy is staring us in the face. 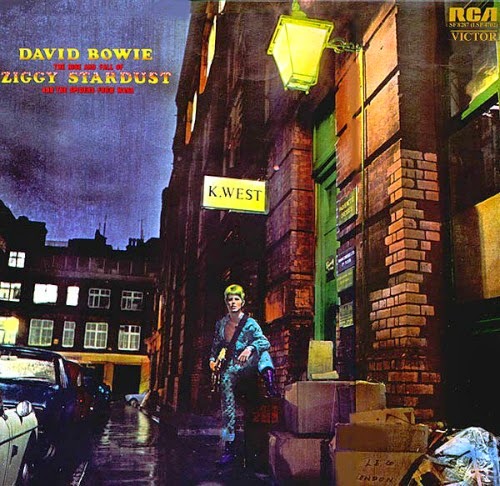 David Bowie's warning us about Kanye.

Also, the end of the world at the hands of Kanye West.

EDIT: It has since been pointed out to me that Kanye was born FIVE YEARS and two days after the album's release. Spooky, huh?

EDIT EDIT: And here's the whole thing in one simple diagram: 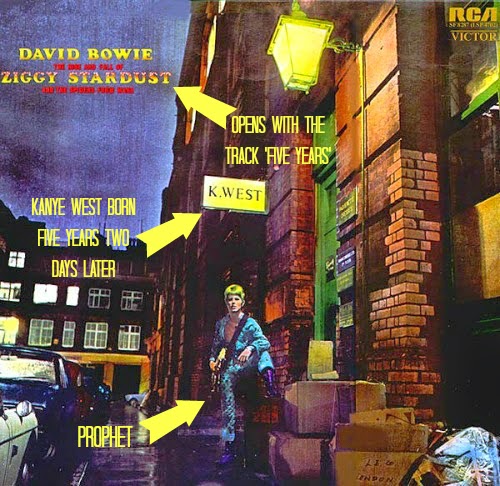 And it must be true, because the Daily Mirror says so.
Posted by Alistair Coleman at Wednesday, February 11, 2015

I was thinking about something similar this morning while dodging the MANIACS on the M4. How much of todays so-called "music" will we be hearing in 50 years? Where's our Stones or our Beatles? Or our Bowie, for that matter. Today's semi-lyrical noise producers are, to be frank, crap.

I had my hair cut this weekend. I only mention it because I forgot that last time I did I vowed never to go to that salon again because of the utter crap that was blasting out of the hi-fi.
At least this time I managed to get them to turn it down. They refused to turn it over. But it was ambient trip-hop on Saturday rather than Kayne West or some dub-step maul.

I always thought Davey Bowie was a cunt.

I am now inappropriately proud of my contribution to this.

You've missed an important piece of the puzzle. If you find the wider cover art from Ziggy, the box says No. 2003. This can be understood to say, around November 2003 the Kanyeezen one would present himself to the masses. In late september 2003, Kanye released the Through the Wire single, and in February of the following year he released his debut album, College Dropout. In November of 2003 Kanye was first becoming a publicly known entity.

Will report back when I have learned more..