FAITH HEALERS: Under the Gazebo of Ignorance

To town, to pick up some drugs for my streaming nose and to hand money to those Starbucks tax-dodgers in return for their tasty, tasty fruit toast. Because if there were gods, Starbucks fruit toast would be their food.

However, it wasn't that which left the bad taste in my mouth (see what I did there?), but the fact that the management of our local shopping centre had let a bunch of faith healers operate inside the premises.

Now, I've had run-ins with roving gangs of faith healers before, but their place is outside in the pissing rain, not in the warmth of the indoor shopping centre, where their little pop-up stall, banners and camping chairs patrolled by middle-aged chaps in anoraks on the look-out for potential marks is given some sort of respectability.

Sadly, I had decided that morning not to use my crutches that day, so any chance of flinging them away and dancing up and down outside The Works shouting "It's a miracle, It's a rootin'-tootin' Jebus-sent miracle!" went right out of the window.

But then, I doubt whether I would have been Chosen. The middle-aged chaps in anoraks - from my own observations - choose their marks carefully. Our town appears to be in the midst of a rash of foot and knee injuries, and everywhere you look there's some poor sap hopping around on crutches. At least three of these hopped past the Faith Healing stand while I watched, and they were completely ignored. I suspect people with real physical injuries are too difficult for the hands-on-pray-to-Jesus approach to medicine, and they're left well alone.

In fact, I reckon anybody who looks like they might know better and could cause a bit of trouble are carefully filtered out. Jesus didn't want to know me, genuine limp or not. No, they're after the easily impressed and easily converted for their mind games. It's all about adrenaline and endorphines and the planting of belief so that the mark leaves the stand, clutching a few leaflets, buzzing enough from the experience to think their ache in the side is cured.

Which, of course, it isn't. 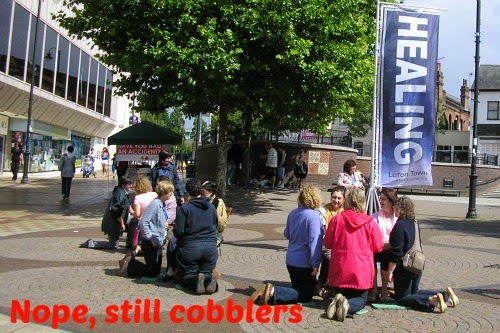 I'm a big fan of medicine backed up by evidence and peer-reviewed research. That's because medicine backed up by evidence and peer-reviewed research fixed my foot while the reiki lady who pronounced me cured several years ago couldn't have been more wrong. So, the minute the BMJ publishes a paper that proves faith healing works, I'll pat them on the back and welcome them to the fold, but I'm certain that trhe heat-death of the universe will happen first. In extreme cases - and there are plenty of examples - faith healing costs lives.

Yes, there are many, many people out there using the concept of faith healing to con vulnerable people out of money in return for the belief that their cancer has been cured. And that's evil. But on the other side of the same coin are people who practice faith healing because they firmy believe in its god-sent powers. Misguided? Yes. Evil? Probably not, and depends on your perspective, just a different class of wrongness. Parents who let their children die because a pastor says that God will heal them, there is evil afoot, but the parents may be victims themselves of a collective con that all parties believe in.


But that's a world removed from street-healing, types, right? No. If they claim they can cure cancer, MS, despression (just a few highlights from the now banned leaflet above), then they are dangerous in giving false hope.

Like horoscopes, reiki, remote reiki, homeopathy, crystal healing and something I just made up involving the psychic power of dogs, it doesn't work, yet there are probably millions of people who swear otherwise. Belief in these things rejects the power of expertise, in a world where the unproven is given just as much weight as evidence-based science because it has enough people believing it to be true.

But belief in fath healing, homeopathy etc etc is just the start of a dangerous road where vaccines are rejected and life-saving medicine is ignored. Yes, given enough time, the problem will cure itself, but I'm not one to put up with the colateral damage, and I'd never wish harm on any person no matter what they believe. And yes (as I've since be reminded), there are many Christian doctors guided by faith. Which is good, because God doesn't like leaving things to amateurs armed only with garden furniture.

If you want to worship anti-science, that's fine by me. But as you stand under your gazebo in a town centre pulling in the vulnerable for a bit of hands-on, remember that your anti-science kills.


A rule of thumb:

If you think those loonies are bad..http://www.quackometer.net/blog/2015/01/how-to-get-bad-law-that-nobody-supports-through-parliament.html

That leaflet contravenes the Cancer Act of 1939 which says (section 4):
"4 Prohibition of certain advertisements.

(1)No person shall take any part in the publication of any advertisement—
(a)containing an offer to treat any person for cancer, or to prescribe any remedy therefor, or to give any advice in connection with the treatment thereof; or"

Reminds me of the closing lines of my 'True meaning of Christmas' nativity post : "...and the donkey in the corner brayeth 'Eye Ore it's a fuckin' miracle'..."

The power of the mind is a wonderful thing as is the placebo effect - however faith healing really is just cobblers!

When I see a crippl... sorry, handicapped person kneeling in front of a faith healer in the street. I am tempted to go over and whisper in their ear "Excuse me, but you are kneeling in some dogshit" then watch how quickly they leap up, and then say to the faith healer "See? My magic is more powerful than yours"

Well said Mr Mallard. You can always find the irrational in malls. Here is a Venn diagram which explains the situation succintly. 'Let there be light.'

It was noted that when the Bonfire of the Quangos was lit a while back one of the victims was the thing that "oversaw" homeopathy. This elicited a comment along the lines of "having a single junior civil servant in the place would have been just as effective as a whole department" which is the kind of double-edged wossname I wish I'd come up with.