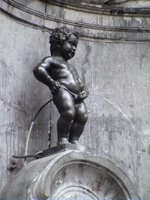 This is, perhaps, the mankiest story I have ever written, and contains scenes of an excessively fetid nature. The easily offended may wish to read on. You might learn something.

Sometimes I think this little episode was nothing but a terrible dream. An occurrence so excessively corrupt and manky that, even taking my own fetid life into account, I wake up sweating, knowing full well that NO, this could never have happened to me. Yet, deep down, I know this to be a lie. It happened, and the head-shrinkers have made a fortune out of me as a result.

I had a very demanding, filthy girlfriend called, and I'll be charitable here, Barking Mad Sharon. She was impossibly possessive, and in a short, doomed affair in the arse end of the 1980s, she rarely let me out of her sight in the whole two weeks we were together. This overprotective nature made my everyday activities such as "work", "shopping" and "going to the bog" incredibly difficult, as any attempt to leave her presence needed at least two hours' notice and an application in writing. Followed, on my return, by the Spanish Inquisition.

She was also, apropos of absolutely nothing, the hairiest person I have ever met.

Barking Mad Sharon, getting right to the point of this whole sordid debacle, had an ungodly thing about golden showers. Despite my obvious reluctance (it was a bugger for the laundry), she expected a full-on, gushing performance on each and every encounter during the two weeks of dreadful thrashing about that our relationship entailed.

So much so, on a rare occasion that we actually donned clothing and ventured, blinking, into the real world, she greeted me in the midst of a group of friends with the words "Are you going to piss on my tits tonight, or what?" She was a right charmer, that Barking Mad Sharon.

Now, I don't know about you chaps, but human biology being such that it is, I find taking a piss whilst aroused to be an incredibly difficult feat. What B.M Sharon didn't understand was that men are built with a valve. A valve that precludes doing the sex and doing the wee at the same time. Only with specialist training, or, in the case of certain continental art movies, a hidden tube and a bloke off-camera with a squeezy-plunger-me-do, can a normal person achieve what she wanted the most in her life: my waste water all over her writhing, hairy body. And everywhere else, for that matter.

Also, this whole pissing-on-demand thing just doesn't come naturally to most blokes. Many are the times I've stood at a urinal, completely unable to strain my onions, simply because someone else is doing the same, desperately fighting the urge to look at your nob. All you get in these strained circumstances as you stand there, eyes firmly screwed shut, concentrating on the job in hand, is a pathetic bottom-burp, which only adds to the embarrassment. And B.M. Sharon wanted it on tap.

Much to the dreadful Sharon's disappointment the most she got were a few pitiful drips. It also didn't help that I'd done an enormous wee and scrubbed my thing down with a Brillo Pad beforehand, just to be on the safe side.

Sensing the our relationship was doomed to the inevitable split, I did what any caring young fella would do in the circumstances: I pissed into an empty jam jar and put the brimming, steaming pot in a handy place for when it might be needed during that evening's gymnastics.

I can be dead thoughtful at times.

Then, at the height of the fighting:

"I've got a present for you. A special present."

"What?" she gasped, the hairs bristling lasciviously on her arms.

"Your ultimate desire..." I teased, realising only then that the contents of the jar had, in fact, gone stone cold.

"So what's that then?" she asked, as I unscrewed the lid, unleashing the fetid smell of stagnant wee into our den of lust.

There's no pleasing some women.

There was the inevitable, dreadful row which ended up with one of the protagonists storming out, semi-naked, screaming words that would only be regretted later: "I wouldn't piss on you if you were on fire!"