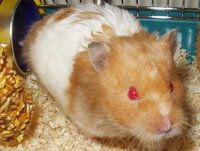 Decorated by the British Government both for his remarkable war record - in which he rescued an entire company of soliders whilst under enemy fire in Iraq, armed only with a set of nippy teeth and a red plastic runny wheel - and for his services to entertainment, Minogue was the bestest hamster Scaryduck Jr ever owned. Minogue will be best remembered by the British public as co-host of the popular TV show "Let's Torture Jimmy Carr" and its sequel "Let's Torture Graham Norton".

In later life, he brokered in peace deal in the Congo, which resulted in the recent democratic elections, and worked hard behind the scenes at the United Nations to make Secretary General Kofi Annan appear more fluffy.

"The best getaway driver I ever had" - Robber Rabbit

"I am most saddened" - Her Majesty the Queen

In a private ceremony, Minogue was buried in a KFC Popcorn Chicken box in the family plot at the top of the garden. No flowers, donations to RSPCA.

He was the best hamster ever, and even managed to bite me on his deathbed.

Your Suggest-os, plz, for the name of his eventual replacement.
Posted by Alistair Coleman at Monday, August 21, 2006