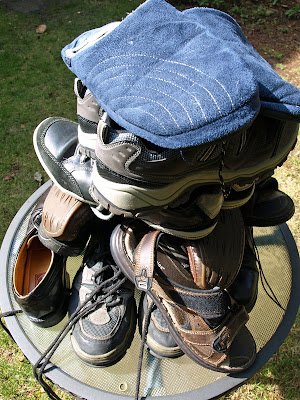 They're quite useful, and some people quite like them. In fact, some people like shoes so much, they will own quite extraordinary numbers.

Of course, there are sensible limits to the numbers of shoes a person can own without being seen as either a bit weird or a cast member from The Only Way Is Essex, a figure which is open to considerable debate.

According to latest figures released by the International Sexist Thought Institute, a Colchester-based think tank dedicated to sexist talk whilst downing large quantities of expensive lager, women own at least (and I quote) "Oooh, an absolute metric shedload of shoes, and they don't even wear half of them."

But back to shoes, and the whole reason for this train of thought: How many is too many for a man to own?

After an unfortunate bout of footwear buying, I suddenly went from two pairs of shoes (both of which were several years old with soles worn so thin I could feel the cracks in the pavement) to five pairs, which I feel are an extreme limit for one man. One pair cost me £45 from Debenhams, a mind-boggling sum of money that still gives me a nose-bleed when I think about it, even if they were paid for out of gift tokens which could have been spent on at least four pairs of value-brand jeans. People tell me that others are prepared to shell out even higher amounts for shoes. That's crazy talk.

I also have two pairs of carpet slippers - a totally unnecessary extravagance - one to wear about the house, and the other with a slightly harder sole which allows short errands around the garden and out as far as the postbox down the road without looking like I'm wearing slippers in public. Once, at the age of eleven, I accidentally wore my slippers to school, so don't ever tell me that I do not know about what it means to feel cheek-burning shame.

In the cold light of day, my footwear indulgence looks just awful. Worse than my car history should the day ever come that I am the here-today-gone-tomorrow celebrity in Top Gear's Star in a Reasonably Priced Car:

That's seven pairs of footwear, and I fear society may judge me for this.
Posted by Alistair Coleman at Thursday, September 13, 2012