On actually quite liking the Olympics in the end 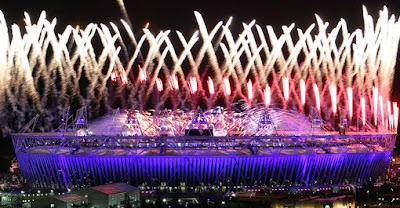 A Kids' Olympics, just for young'uns under the age of twelve, running round screaming and being sick as dogs. This would be the best Olympic Games ever.

Of course, we'd have to weed out the drugs cheats competing with illegal levels of Sunny D; and not to mention pushy parents, who will be banned from standing next to the running track screaming "Come of Sebastian! Kick the little fucker in the shins!" before punching another pushy parent in the face.

Or, perhaps, an Animal Olympics - an Anilympics, as it were - but only if there is a Dog That Looks The Most Like Your Head Of State competition, which would be walked by Iran's Mahmud Ahmadinejad, whose pet pooch was accidentally spanged in the face with a shovel as a puppy.

Can't help thinking that an Anilympics opening ceremony runs the risk of an overdose of bum sniffing, and some of the smaller contestants getting eaten completely TO DEATH. Such is the way of the natural world, and this must be encouraged.

Or a cynical bloggers' Olympics where... oh, forget it.