"Like a clown car crashing into another clown car - tragic, but it's only clowns" 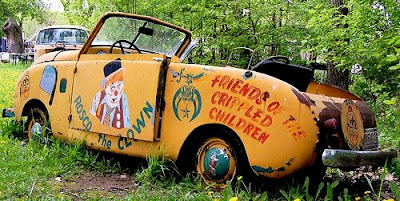 It is often said that anybody who expresses an interest in running for office should automatically be disqualified from running for office, as the kind of person who wants to be in charge of everything should never, in any circumstances, be given access to the levers of power.

Back in the 1990s when I was some sort of feckless idiot, I was a member of the high-IQ organisation Mensa. I know what you're thinking, but the stark truth is that they know how to throw a good party, and I have yet to apologise to forthright TV critic Garry Bushell-On-The-Box for making off with his umbrella after a boozy Mensa evening in a rainy London.

After several years of membership, I was asked if I would like to take a more active role in running the organisation, and went to a few committee meetings and subscribed to their door stop-sized "internal politics" newsletter.

Now, I've got to be very careful about what I say here, as a few of the people I met in these circumstances could be most charitably described as "precious", while others were - at best - stark raving bonkers, and would write twenty page letters to the newsletter (subsequently published in full) over the choice of biscuits at committee meetings and what would happen to the very fabric of society if Bourbon Creams were ever served again. Minor grudges were held for years, laid out in full-on "He said, she said" fury in the newsletter, which often needed a fork-lift truck to deliver such was its size.

Remember, these were people who were in the top two percent of measured intelligence, and have a (quite possibly framed) certificate to prove it.

This brings us back to the original premise: People who say they desire high office not being allowed withing a hundred miles of a committee room. And this also goes for people who say (for example) "I have no desire to be leader of the Conservative Party", when they actually mean "Me! Me! As Orpheus, fair Eurydice and the pantheon of Gods on Mount Olympus are my witness, vote for ME!". Not naming any names.

The only way that this situation can be remedied is by appointing our leaders by lottery (although this gives us an unacceptable one-in-sixty-million chance that Joey Barton will end up as Prime Minister), in which anybody who expresses desire for high office should prove their ambition through a Big Brother-style reality TV show which I shall call "Locked in the Cupboard Under the Stairs For Six Months and Fed on Scraps From the Bins Behind Nando's), where "sudden death elimination" would mean exactly that.

We'll be seeing much less towsel-haired bufoonery if that were the case, and national discourse would be much the better for it, I dare say.

If there's one thing that Mensa had right, it was the written entrance exam. If you put me in charge of the internet, it would be the first thing I'd introduce for anybody who wants to comment on this article. Not that I want to be in charge*.

Email ThisBlogThis!Share to TwitterShare to FacebookShare to Pinterest
Labels: a little bit of politics, mensa