The Rainbow Bridge, and why it must be destroyed with fire 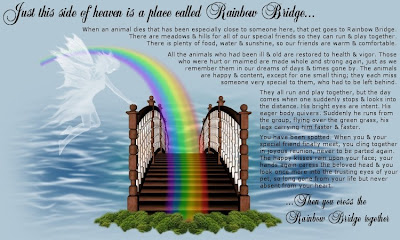 Call me a hard-hearted old git, but one side effect of losing a pet to old age is the number of well-meaning yet nonsensical messages of commiseration we have received from complete strangers on the electric Facebook.

Many of these refer to poor, dead Snowy going to "The Rainbow Bridge", a mythical place that exists in the minds of soft-minded people looking for a painless euthemism for Death's Icy Claw when their beloved pet goes paws-up. To us hard-hearted old gits, the Rainbow Bridge would be the one over the Basingstoke Canal, the waters of which being frozen solid, meaning the dog-inna-bag just sat there looking awkward until he was fetched a nasty peck by a passing goose.*

For those of you with a high tolerance to saccharin, here's the Rainbow Bridge nonsense in full, which I cut-and-paste from a website presented in Comic Sans, the Font of Champions:

Just this side of heaven is a place called Rainbow Bridge.

When an animal dies that has been especially close to someone here, that pet goes to Rainbow Bridge. There are meadows and hills for all of our special friends so they can run and play together. There is plenty of food, water and sunshine, and our friends are warm and comfortable.

All the animals who had been ill and old are restored to health and vigor. Those who were hurt or maimed are made whole and strong again, just as we remember them in our dreams of days and times gone by. The animals are happy and content, except for one small thing; they each miss someone very special to them, who had to be left behind.

They all run and play together, but the day comes when one suddenly stops and looks into the distance. His bright eyes are intent. His eager body quivers. Suddenly he begins to run from the group, flying over the green grass, his legs carrying him faster and faster.

You have been spotted, and when you and your special friend finally meet, you cling together in joyous reunion, never to be parted again. The happy kisses rain upon your face; your hands again caress the beloved head, and you look once more into the trusting eyes of your pet, so long gone from your life but never absent from your heart.

Then you cross Rainbow Bridge together....


Your sick bag is in the pocket of the seat in front of you.

Then we think back to poor, dead Snowy and realise that he'd probably tread his own poo all over the Rainbow Bridge, start a fight with all the other dogs, steal their food, breathe all over them with his Death Breath until the whole thing is swimming in sick, and they have to burn the Rainbow Bridge down and start again. A victory for the powers of Dogston.

And why - we ask - is it called the Rainbow Bridge when dogs are colour blind anyway? For accuracy's sake, it should be called the Shades of Grey Bridge, opening up all kinds of rolling vistas of kinky dog sex horror.

Besides that, we weren't even poor, dead Snowy's first owners. Who is he going to wait for? Us, or the elderly people who had him before, and are clearly going to get there first. Are we going to have to resort to fisticuffs? So many questions.

Down with this sort of thing.

* This didn't actually happen. No dogs were flung off bridges, even if it was what he would have wanted.
Posted by Alistair Coleman at Tuesday, January 29, 2013

I'm glad someone is taking a stand against all that Rainbow Bridge bollocks.

I wonder if, in the eyes of people who belief that sort of guff, my deceased pet cockroaches get to go there?

I hope this doesn't actually happen. There's nothing that would grind me down more than the prospect of having to spend all eternity with my cat. I loved the little bugger but let's face it, he was a little bugger.

Dog angels are coming for you

Didn't the vikings invent this? the soppy pillaging tarts.

I've had dogs, cats, rabbits, budgies and fish leave for the bridge, I wonder if they will all meet me, or if they will fight to the death until there is only one left, limping to the bridge. I hope its the rabbit

Don't worry, your doggy is with the angles now. Or the Angelas, rubbing his shit into and ruining Goering's looted rug, which is a shame because it really brought the room together.

For a second I thought you meant pet heaven was located here, which was a bit disheartening:

You are a man after my own heart(lessness).

@TRT is he doing trigonometry there

None of you will have to worry about seeing your pets at Rainbow Bridge, because I think you all will be going the other direction!!! If this is what people want to believe to get them through the grief of losing their pet, then so be it. I'm sure you all are "it's just a dog" people .... and that's a shame ....

Agree strongly with the above comment! You with all the negativity, I really feel sorry for the pets that you Owned, you all seem to be cold, hard, heartless people who see no light at the end of the tunnel, trouble is you are already Dead (at least your hearts). Probably don't believe in God or heaven - isn't that what is truly going on here?
Honestly you have to much time on your hands to go hating on others for things like "Rainbow Bridge" that may bring comfort for those hurting!! So sad for you, you may want to seek help in finding your heart & some kind of compassion for others.

I lost two dogs in two months, and you call me hard-hearted and already dead. A fine example of christian love.

No, I don't believe in your invisible sky fairy, and millions of people don't either. Get used to it.

Well nobody said they "believe it" just said it made them "feel better" probably made their kids feel better too. Like believing in Santa Claus, so what if they do believe it anyways, what's wrong with believing in a little magic?

Why bring the "Christian love" comment into it. You're a hypocrite too then.

Let them believe what they want, it's a free country YOU get used to it. I wasn't going to comment until I saw your comment. Read the whole article and giggled at some parts, some of it is true although some of us would never say it out loud.

Curious how your dogs passed. Two in 2 months? Hmmm....

I feel sorry for their pets too. 2 dogs in 2 months? How does that happen? Hmmm

This is the bit where I reply to your insinaution that my pets died in untoward circumstances and make you feel AWFUL.

You see, we work with a charity that finds homes for elderly and unwanted dogs that might otherwise live out their final days in kennels, or simply be destroyed. We take them knowing full well we could have them for years, or for months, depending on their age and general health.

Snowy was elderly and with extensive health problems, and he died peacefully at the age of 17 after a long illness.

Charlie, on the other hand, arrived at the age of 12, and we had no idea he was in the advanced stages of cancer. One day he was off his food, the next day, he was dead. That hurt like a kick in the stomach, and I hope it's something you never have to experience.

So, next time you throw snark at somebody you don't know, think before you hit "Publish".

It's a nice thing to send to a child who has just lost a pet. Nothing more. Lighten up you old fart.