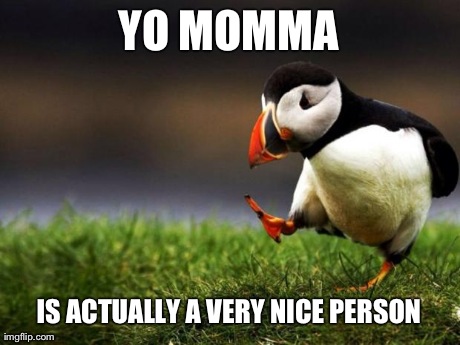 This, from the Reddit thread Parents of Reddit, what's something that your kid has done that you pretended to be angry about but secretly impressed or amused you? is my son's finest hour. Apart from all the other finest hours he's had, because he's had loads of finest hours.


I was called into school by my son's form teacher because he had upset one of the other boys (who had just happened to be bullying my son, virtually unpunished, for several months). In the course of a tense meeting in which the boy was essentially blamed for allowing himself to be bullied, came this exchange:

Teacher: He really upset [bully's name]. I demand that he apologises for his behaviour.

Teacher: [reads matter-of-factly from a piece of paper] He went over to him in the school field during lunch break and said "Yo momma's so fat she's got her own gravitational field"

Me: Disgraceful. Utterly disgraceful. I have no idea where that came from.

That night was pizza night by way of reward, because that teacher was an arse.

I was also secretly impressed at the way he managed to ride his bicycle straight into a castle, which was not my finest hour because I forgot to warn him about not riding your bike into an antique building with walls six feet thick.
Posted by Alistair Coleman at Monday, August 10, 2015