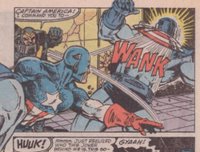 Oh, those puritanical seventies, he said, not entirely seriously. Born into a household ruled by parents of an age where the strongest words in the English vocabulary were "dash", "blast", "cotton twill slacks" and "filthy Bosch", you could be sure of one thing. If anything remotely filthy passed your lips, you could only accept one outcome: thrashed within an inch of your life, and back again with The Plastic Thing. Which was pretty fair, if you ask me.

In this respect, one of the defining moments of my life occurred when accidental profanity burst out of my mouth and ran around cussing madly in front of grown-ups. It was awful. I was playing with some toy cars with Richard Pearce from down the road in my back garden, and I just couldn't help myself.

Except it came out wrong. Bugger.

Thrrrrrassssh! went the Plastic Thing- the parental punishment tool of choice that was purchased as part of a Tupperware set - across my bottom, and the rest of the day was spent in my room, saying "bugger" under my breath and plotting destruction on my polythene arch-nemesis.

Glowering at the injustice of it all, I was still in the foulest of moods when my father returned from work, walking up the drive to the front door. I must admit that flicking him a V-Sign from my window was not, in retrospect, the welcome home he was expecting after a hard day's graft as bottom-doctor to London's rich and famous that particular evening.

After an hour or so, the word erawreppuT had just about faded from the back of my thigh.

So, I think I've set the scene here. Swearing in respectable middle-class southern England was strictly verboten. Off the menu. Interdit.

"What would Jesus say?"

And it is a glorious sight to behold, four hundred schoolkids, all acting as one, strutting about like demented robots, all singing from the same hymn-sheet. A hymn-sheet with the word "wank" printed on it, in large, easy-to-read letters.

It couldn't last, and I think at least one dinner lady subsequently had her ears amputated.

No-one understood why we were in so much trouble. It's hardly as if we were lying under the climbing frame, looking up girls' skirts (again), or playing Doctors and Nurses with Naked Patients (again), or playing vampires with Nosebleed Andy's nosebleed (again) - these grown-ups were just far too sensitive. Ringleaders were rounded up, and bodies were piled half-a-dozen deep outside Mr George's office. And then, the letters home.

Three years later, punk arrived, and the Plastic Thing became part of my sister's wardrobe, if I'm not making this bit up.
Posted by Alistair Coleman at Friday, March 24, 2006