Book Review: The Unreliable Life of Harry the Valet 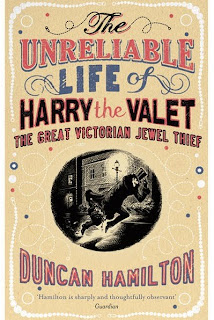 Every now and then I get an email from a publisher or PR company asking if I would like to review on of their books. I take stock of my moral compass as a noted blogger and reply thussly: "Yeah, send me your free stuff", for my moral compass has been set to "free snizzle" for some years.

And so, those nice people at Random House (who might be interested to know that I have no less than two compelling manuscripts nearing completion), asked me if I might like to look at Hamilton's new book on Harry the Valet, and it was as if an occult hand placed said tome directly into my hands.

Now, true-crime books are ten a penny, and having read a few stinkers in my time, I approached this title with some trepidation. But then, this isn't any old true-crime book.

The story of a one man crime wave who lived the high life on the back of some of the most audacious jewel thefts in the latter part of the 19th Century, Harry the Valet became something of a criminal celebrity of the age, particularly after his robbery of thousands of pounds worth of jewels from the unpopular Dowager Duchess of Sutherland.

Undone by his love for the stage actress who he was trying to impress, his trial was the sensation of the time, with the printed press publishing breathless accounts of his exploits, fictional or otherwise.

But the greatest mystery, almost lovingly uncovered by Hamilton, is the true identity of The Valet whose very existence was one long string of aliases and untruths from a man who, today, would be pigeon-holed as a compulsive spender, gambler and drinker funded by an extraordinary life of crime in a battle of wits against witless Victorian detectives.

Writing with the benefit of census records and electronic newspaper archives, Hamilton has been able to unravel the life of The Valet from the fiction in which he revelled, from the seeming invincibility of his younger years to the long, sad years behind bars after police detecting methods finally got the better of the light-fingered thief.

Hamilton manages to make a narrative from both The Valet's own account (which he embellishes from the safety of old age) and those in extensive public and newspaper records to create a highly readable and enjoyable book. Also, it provides excellent hints and tips to the aspiring Victorian jewel thief in these days of poor employment opportunities.

Harry the Valet was a star of his time, long forgotten in the years after his death. Hamilton resurrects his memory and puts him in his rightful place in the history of British criminal history. And frankly, it's a damn sight better than the true-crime penny dreadfuls that still haunt the shelves of our bookshops to this day.
Posted by Alistair Coleman at Sunday, May 15, 2011

Email ThisBlogThis!Share to TwitterShare to FacebookShare to Pinterest
Labels: book review, it was if an occult hand