IN PRAISE OF YOU'VE BEEN FRAMED 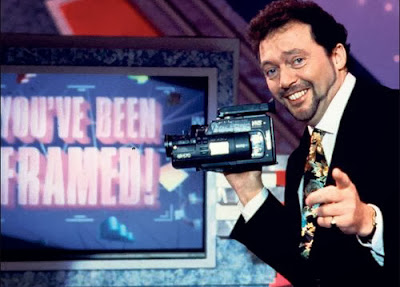 There's a classic episode of The Simpsons (the one with the "I was saying Boo-urns" line) where the Springfield Film Festival is won by the short film 'Man Hit In Groin By Football'.

Man Hit In Groin By Football is a telling indictment on the state of modern US consumerist society, acting as a warning that you should never grow old and infirm, as you are nothing but junk fit for the scrapheap of a disposable society. It's also about a man getting hit in the groin with a football, which is never not funny.


You've Been Framed has been on our screens for 23 years, and they still show the clips from the first series because those two men fall down the weir and the bloke getting covered in a fountain of manure will never get old. The only thing that changes are the presenters either through death (Beadle), or through death of your career (Wilkes, Riley).

Let's be charitable, and call the first three presenters and 14 years of the series a bit of trial and error as they built up to the pinnacle of television excellence that it is now. No farting about in a studio, just end-to-end clips of men getting hit in the groin with a football, and Harry Hill noticing that the victim looks a bit like David Cameron, ergo the kicker must logically be George Osborne.

This appeals to me, because my entire life has been spent laughing at people who look a bit by celebrities, only to be told in no uncertain terms that they do not and "Why don't you grow up?". Now I am re-married and YBF is prime-time, and everybody looks a bit like Kerry Katona getting thrown into a swimming pool by a Robbie Williams and it's the funniest thing in the world.

More of this kind of genius. The internet's full of lengthy "FAIL" collections, but without the Hill commentary, they are NOTHING. In fact, if ITV don't start a You've Been Framed channel showing nothing but 24-hour Man Being Hit In Groin With Football, then I'm going to have to nearly say something.

FACT: The £250 bounty has never changed in 23 years of broadcasting. If YBF! followed inflation, you should be getting £481 per clip now. Cheapskates.
Posted by Alistair Coleman at Wednesday, October 23, 2013

I have a sick friend, very sick. I don't mean sick "proper poorly", I mean sick "raving looney". He constantly watches YBFed. When it finishes on one channel he hunts around the others to find it again. He has a lorra DVDs of the show (?) he has recorded over the years and insists on showing them to me whenever I call at his house! He wanders the streets with a video camera hoping to catch some poor bastard being run over by a bus, or a man being hit in his wedding tackle with a football and collect £250 from TV company.

While damaging the family jewels with a football to the equipment may be amusing - I still say nothing beats the former opening segment for ABC's Wide World of Sports - showing the ski-jumper falling on his arse and sliding off the high slope as "The agony of defeat".

The dedicated YBF Channel already exists it is called ITV2.

(Note: The previous comment was me being an complete idiot and not an attempt to give the article a Grade C or an abbreviation for anything rude.)