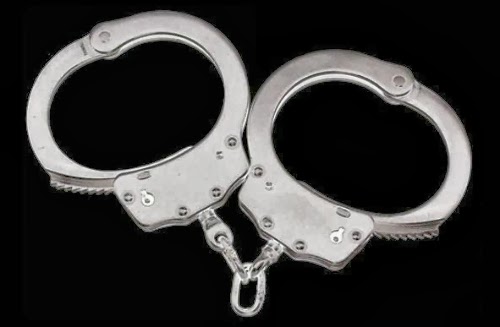 I've always had a tenuous relationship with criminal behaviour.

Twice I've been the victim of bicycle theft, both occasions leaving me stamping off home wishing death on the light-fingered ne'er-do-wells.

The first time was the racing bike I bought with one of my very first pay packets, which was taken from the racks at Twyford station by a criminal armed with a set of bolt-cutters, the universal key of bicycle thieves the world over. I stamped off home wishing death on those concerned, but did nothing of the sort. After several months borrowing my mother's Raleigh Shopper, I was shamed into buying myself a replacement, but the luggage box on the back was never as good.

My second occasion as a victim of crime was the cycle I used to get to and from the station on my long rail commute between Weymouth and Reading. Leaving it chained to a road sign, it didn't occur to me that thieves possessed the wit and the imagination to lift it fifteen feet up the pole and ride off with the thing. Not bolt-cutters, just an improbable feat of strength. Two weeks later, I saw baseball-capped villain who had done the deed, riding around Caversham on my bike. But the insurance had already paid out, and I already had a far better machine, and –by then – a car, making the rail commute a thing of the past.

While I am quick to condemn criminals and criminal behaviour, I remain haunted by my own past life as a thief. One incident weighs heavily on my mind, that being the day – as an impoverished student – I walked around and around WH Smith in Bracknell clutching a 35p packet of rub-down lettering, before walking out of the door "forgetting" they were still in my hand. Various attempts to pay back my ill-gotten gains have ended in naught, as till operators in Smiths get awfully confused when you say "keep the change", as it messes up their balances.

So, when crime rears its ugly head near me, I'm often torn on what to do. Yes, it's my duty to report it, do something about it; but on the other hand, I'm a renegade before the law myself, and who knows how things might end. In most cases, I will defer instead to the measured use of sarcasm, which I believe works very effectively in the field of crime prevention.

Our road, contrary to what our local police say, is a hotbed of very minor crime, for every now and then, somebody craps into a plastic bag and leaves it at the side of our street. This has got me so angry I've almost nearly done something about it, and I'm tempted to join those people who are photographed pointing at things in local newspapers because they think it does any good. All it does is gets you labelled as "that bloke from page nine of Thursday's paper, pointing at the bag of turds", and it's not a good name to have.

So, at 11pm the other night, as I was exercising the hound and looking out for the Phantom Crapper, I couldn't help noticing the car of youths pulling up by the entrance to the Bummy Woods. It was clearly obvious that they were between pub and nightclub, and looking for somewhere to take a few puffs of illegal substances. And knowing our one local nite spot, they'd need some sort of narcotic to dull the forthcoming terror.

In trying not to make it obvious, they were probably the most obvious drug takers I'd ever seen. They might as well have parked in the special drug-takers' parking bay, holding up a sign saying, "Hey! We're taking drugs, us!" while posting an update on Facebook saying "In the Bummy Woods, having a bit of puff".

They staggered into the dark, where fireflies of dodgy cigarettes could be seen bobbing about. From the safety of many yards away, I called out "Don't make it too, obvious, eh?" because sarcasm always works on this kind of person (for eg, those many yards away). However, any reply was drowned out by one of their number calling out "O God! I've sat in shit!", that being a religious calling clearly not in the scriptures. Not wishing to find out more, I took Falstaff's advice about discretion and valour, and left the scene.

The next morning revealed that the Phantom Crapper had indeed struck that evening, sneaking in and out like the Banksy of faeces, and it took one committed dope-head to uncover his latest work. I was so cross I didn't even do anything.
Posted by Alistair Coleman at Monday, October 14, 2013

Email ThisBlogThis!Share to TwitterShare to FacebookShare to Pinterest
Labels: crime and punishment

I used to get through loads of those WH Smiths letter transfers.
All the while waiting for the home computer with a decent printer to be invented...