So, why isn't there a huge statue of Wellington in London? 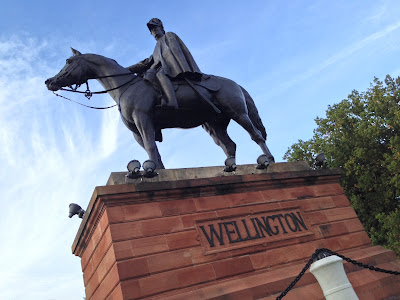 Fans of killing uppity French people to death are - in the main - satisfied with the monument to the life of Lord Horatio Nelson in the middle of London. In fact, he gets a whole city square, column, lions, fountain and the whole nine yards.

However, for fans of the Duke of Wellington, there's not very much at all. You can go and take a look at the Wellington Arch at Hyde Park Corner, providing the traffic doesn't get you first, or perhaps pay your money and go an see both Wellington and Nelson in the crypt at St Paul's.

So why doesn't Arthur Wellesley get a monstrous great ugly statue in the middle of the capital, paid for by a grateful people. 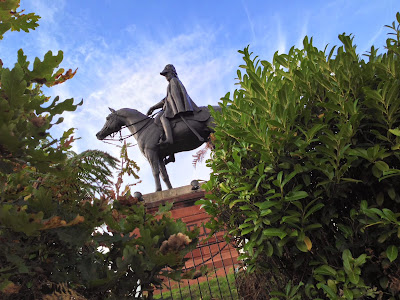 As a matter of fact there was, for perching on top of the Wellington Arch was a monstrous great ugly statue of this nation's greatest general, paid for by a grateful people, and hated by just about everybody who saw it. Not least Queen Victoria, because it spoiled her view from Buckingham Palace.

The trouble was, it being outside the Iron Duke's front door, they couldn't whip it away elsewhere until after he was dead and buried. So, a suitable time after his death, it was moved from Hyde Park Corner, and given to the military town of Aldershot, safe in the knowledge that the army would look after it.

So they stuck it on a big hill, and it eventually disappeared behind some trees, mainly because it still looks hideous. Even now, looked after by a friends committee, the trees have been cut back, but it still looks a sorry site perched on top of a muddy hill covered in bushes and empty drinks cans. 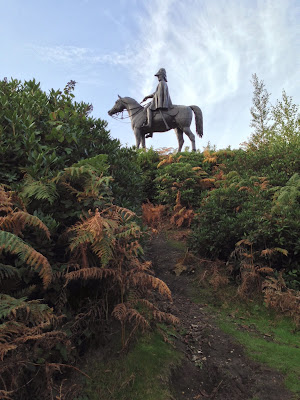 I took a trip up there to see it up close for myself, and considered its position on a bank overlooking a forlorn car park less than becoming for a man of his stature. Still, they got around the old "You can't do statues of men wearing trousers" conundrum by putting him in knee-length boots and hiding the rest of his legs behind a huge cape. Well played, there.

A far fitting monument to the great man is only about ten miles away, a beautiful column topped by a statue of Wellesley at his old estate at Stratfield Saye. At the end of an avenue (which forms part of my commute to work), it looks every inch the tribute when the sun sets behind it in the evening. This, in fact: 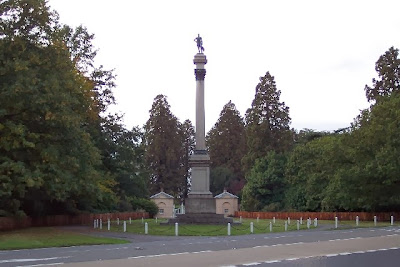 How about digging it up and moving it to London. Anyone got a lottery grant going spare?
Posted by Alistair Coleman at Monday, October 28, 2013

Email ThisBlogThis!Share to TwitterShare to FacebookShare to Pinterest
Labels: aldershot, duke of wellington

Why isn't there a huge statue of Carlo Ponzi in London?

A statue of Wellington would be Boot-iful

I suppose it's a matter of taste really. I wrote to Angela Merkel asking why there wasn't a statue to Mr A. Hitler in Berlin. She didn't answer; obviously a very busy woman.