On the romance of Mills and Boon

I swear this is the last post I'll write about our recent wedding, but I really need to show you one of our wedding presents, so bear with me*.

Both Jane and I love books. We've got a book room and heaving great shelves of books all over the flat. So much so that our wedding invitation was sent out in the form of a hackneyed Mills and Boon romance. 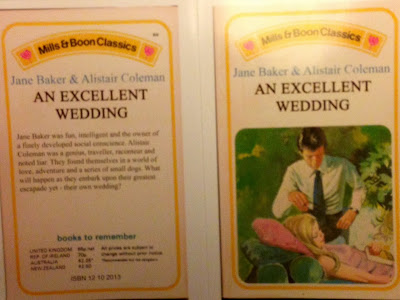 So, it came as no enormous surprise that one of Jane's excellent work friends - as part of an already generous series of presents - should give us a Mills and Boon romance carefully chosen as the only one in the canon with a brunette, curly-haired heroine.

This one, in fact, a classic title from the 1980s, where the heroines were spunky and rich old men were the kind of person you wouldn't like to meet on a dark night. 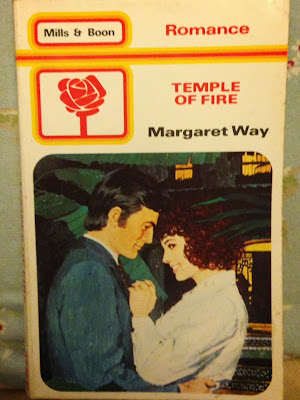 And Jane, being the book person that she is, spent a couple of days reading it, exclaiming at regular intervals how incredibly awful it was. Even by Mills and Boons standards, it both sucked AND blowed in its frankly creepy plot-line.

And the tale of the curly-haired brunette heroine (described, I am told, as "ginger spunk") forced into an unwilling relationship with her much older uncle reached its tumultuous climax with this knee-trembling paragraph of what might be called prose.

For those of you who can't see the image, it says: "I want you," he muttered blindly, "I want you so much, I've even been thinking about rape."

Yep, the old charmer loved her so much, he wanted to rape her, and they lived happily ever after. A tale of messed-up morality if ever I saw one.

And Neil Gaiman says there's no such thing as a bad book for children. I beg to differ, sir. I think the kiddiewinks need to be spared this one.

(The author is one of M & B's most prolific, it turns out, with over 100 titles to her name. I'll be charitable and say that we caught her on an off day)

* No, there really is a bear with me and AAAAAAAARGH
Posted by Alistair Coleman at Thursday, October 17, 2013

Thank God it didn't say "bare with me".

And... yeah, what a charmer that guy is. And a cheapskate. Picking a bunch of highly allergenic yellow flowers from a farmer's field... whatever happened to red roses?

Congrats on your wedding. I would have done so sooner but sometimes the word verification isn't worth the trouble. But I don't want to wait too long to congratulate you.

The rainbow cake was gorgeous.

Your wedding invitations: excellent. And brilliant. Life should be fun!

Jane spending two days reading one of those books? Oy, she needs to do what Onslow did in one episode of Keeping Up Appearances: Daisy was beside him in bed, reading one of her romance novels, and Onslow was reading a physics textbook.

That quote from the book: ick.
In the U.S. we have Harlequin Romances. Never went near one. Couldn't even get thru the first chapter of The Bridges of Madison County.

OMG I just asked Her Wikiness about the book The Bridges of Madison County and I see it's scheduled to be a Broadway musical in 2014! Oy vay. Nothing surprises me anymore.