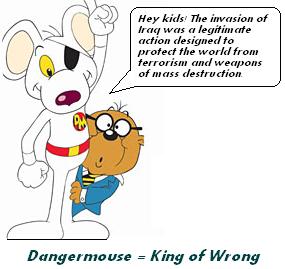 We see that the *cough* so-called Bolshevik Broadcasting Corporation has brought back Dangermouse, that animation much-loved of the poorly-educated middle classes of this once great nation, a crime against good taste that cannot go unmentioned on these pages.

"He's the greatest, he's fantastic, wherever there is danger he'll be there", goes the song, dragged out by trendies of a certain age in the vain hope of confirming their so-called cool credentials to an otherwise disinterested public.

You see, poor deluded obedient citizen of the 51st State, there is more to Dangermouse than meets the eye. It is simple government propaganda, designed to promote the idea of a white, middle-class status quo, and be damned to the darkest corners of Hell if you're anything else. Like a frog, for example.

The enlightened viewer, who can see this evil piece of so-called "entertainment" for what it is, will find that the alleged villain of the piece, Baron Greenback, is nothing but a legitimate businessman ruthlessly hounded by a state apparatus determined to put an end to reptilian (for which read "foreign") direct investment in a free globalised market to which it pays scant lip service.

Dangermouse - white Middle-England fascist bully-boy incarnate - is clearly a portmanteau of David Blunkett and John Reid, clearly designed by the government's propaganda department to drum up support for its flawed and corrupt attempts to control society. A flawed and corrupt campaign to vilify such law-abiding citizens such as Silas Greenback, who came to this country a penniless refugee of a tadpole, and has grown a business empire that makes these so-called champagne socialists seeth with envy.

Even the 'DM' badge on the so-called hero's chest has sinister meaning - 'Doc Marten' - signifying the trampling down of opposition under the mighty boot of British colonial power.

Colonel K (the 'K' standing for 'Kill the Foreign Johnnies and sell their children as slaves' - True Fax!) shows the British establishment at its frightening worst; while everyman Penfold portrays the blind, stupid nature of the British population. Not only are they brainwashing you with this filth - they are laughing at you while they do it! It's all there, sheeple, staring you in the face.

And that is why Dangermouse is thirty shades of wrong.

Grown-ups: Say NO to Dangermouse.

Next week: Lord Voldemort - Is he all bad?

Shameless somethingelsery: It's Misty's birthday today. She wants you to go over and wish her 'Happy Birthday', or she'll throw a big strop and run the lot of us through with her big Viking spear. Well? Get on with it!
Posted by Alistair Coleman at Wednesday, November 22, 2006