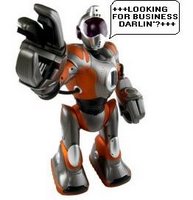 We like to get our Christmas shopping done early, to avoid what passes for a rush in Weymouth town centre come December. We've got a Debenhams and a Woolworths, both built over an old graveyard dating back to the Black Death*, which might go to explain the ectoplasm spoffed all over my most recent copy of OK! magazine, bought, you must understand, for ironic purposes.

So, it was a Friday lunchtime that we found ourselves in Haunted Debenhams, running the eye over what we might buy for certain family members, when we came across a display of frighteningly expensive executive toys, priced for cardiac arrest.

Me: "It's one of those Robosapien

Mrs Duck: "What does it do for three hundred quid then? It had better be special."

Me: "For that money, I'd fully expect it to go out to the off licence, do the housework, cook dinner, and when it has quite done, grasp me firmly with its metallo-plastic pincers and give me the robotic wanking of my life."

Passing Blue-Rinsed Old Biddy: "I'd do it for twenty."

Deal or No Deal? No deal, and not just because she was sporting Noel Edmond's beard.

* The Black Death was Weymouth's gift to a grateful nation. God, some people just can't take a joke
** I hate it when she speaks in bold text. It can only mean one thing: woe
Posted by Alistair Coleman at Tuesday, November 21, 2006