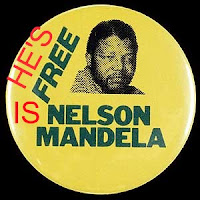 As a bewildered young man, my political views veered wildly between the Young Conservatives and the Socialist Workers Party, essentially depending on which circle of college friends I was most desperate to impress.

I soon found that the SWP had the best of the booze-ups, while the Tories harboured the best posh totty 1980s Bracknell had to offer, which wasn't saying much, to be brutally honest.

It was during this confused period of my life, I was one of dozens who piled onto a hired coach, where we were bussed to London to take part in a rather excitable South Africa Apartheid demo in Trafalgar Square.

Insults were traded with the angry, twisted faces of the opposition.

The odd traffic cone and placard was thrown.

And the police had trouble telling everybody apart and just stood around looking harassed.

In short: a good time was had by all, including the Old Bill who got Saturday overtime.

I know what you're thinking: 'Scary – you're a noble chap, and well done for experiencing this political awakening at this pivotal part of your young life. God bless ya. Really.'

Except – at this particular moment in time, I was desperate to impress a slim young thing called Esther from Wednesday swimming club. She was expensively educated, rumoured to be of the landed gentry, and always had spider's legs showing out of her swimming costume that betrayed the fact that she was a bottle blonde.

In the light of this particular challenge, the dungaree-d temptresses of the SWP could bugger right off – this week I was kicking for the blues and the demo was one to KEEP that no-good leftie terrorist Nelson Mandela in jail.

Whoops. If you're reading this Nelson: I'm very, VERY sorry.